Robert Dudley, fifth son of John Dudley and his wife, Jane Guildford [1] gave his day of birth as 24 June but the actual date is nowhere recorded.

At the time of Robert's birth, his father was a rising man at the court of Henry VIII. [3]

Henry VIII (d. Jan 1547), was succeeded by his child Edward VI, then aged 9, who was heavily under the influence of his uncles, Edward Seymour (who became Lord Protector of the Realm and Duke of Somerset) and his brother, Thomas.

The Seymours were overthrown and by February 1550 Robert's father, by then Earl of Warwick, had become leader of the Council [4] and effectively ruler of England.

Later that year and not then 18 years old Robert was married to Amy Robsart, daughter of Sir John Robsart and his wife, Elizabeth Scott, at the Palace of Placentia at Greenwich on 4 June 1550. [5]

Amy was the same age as Robert. 1550 was also the year that Robert was knighted. [6]

His failure jeopardized his family and Robert was incarerated in the Tower of London. John Dudley went to the block on 22 August 1553. [3]

When Mary I announced her intention to wed Philip II of Spain, a rebellion led by Thomas Wyatt broke out against the match. Lady Jane's father Henry Grey, Earl of Suffolk, was a o-conspirator.

The failed rebellion led to the execution of:

Princess Elizabeth was sent to the Tower at this time and it is thought that this was when Robert's great friendship with Elizabeth developed.

During their time in the Tower, Robert and his brother John, carved their names.[7]

After the Queen's marriage had taken place the remaining Dudley brothers were released not least because of the strenuous efforts made by their mother, Jane Dudley.

Robert was with Elizabeth at Hatfield on 18 November 1558 her accession day and was at once made her master of horse and very quickly became named by the Spanish as the most important person at court being made a Knight of the Garter in 1559.[8] 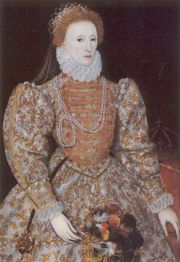 Amy Dudley was kept firmly in the background. Robert was at Windsor with Elizabeth I when Amy was found dead at the bottom of the stairs at Cumnor Place on 8 September 1560. This gave rise to rumours that she had died by Robert's design so that he would be able to marry the Queen, rumours that have not abated to this day. [9]

In 1563 Elizabeth suggested Robert become the husband of the widowed Mary, Queen of Scots. 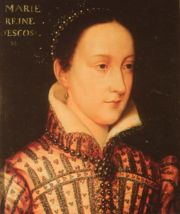 To make him a suitable candidate, she created him Earl of Leicester (Note that he was also said to have been created Earl in 1561, taking the same arms as his brother, Ambrose); [10] and granted him Kenilworth Manor and Castle,[11] and lands in Denbigh and Chirk.

Mary, Queen of Scots was interested but Robert declined.

It was a somewhat surprising episode since the Queen could hardly bear to have him out of her sight and he was largely treated and behaved as her consort.

By 1566 he wrote of Elizabeth I, that he truly believed that she would never marry. They had become friends, he said, before she was 8 years old and she had said it then and later when she was old enough to marry. [2] Even so the Queen was possessive and jealous of the women her favourites loved.

About 1570[citation needed] he began an affair with Douglas Sheffield, daughter of William Howard and his wife, Margaret Gamage and widow of Sir John Sheffield.

The Queen and Robert were both in their late thirties and any prospect that they might some day marry and have heirs to inherit the throne had almost vanished. Even so he chose not to marry Douglas for fear of losing the Queen's favour and his own power and influence. Douglas bore him a son, Robert, in 1574. 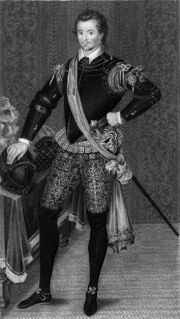 Though mostly at court Robert also saw to the modernising of his castle at Kenilworth and it was there in 1575 that he entertained Elizabeth with lavish feasting and pagentry.[11]

His second liaison with Lettice Knollys, daughter of Sir Francis Knollys and his wife, Catherine Carey and widow of Sir Walter Devereux, also resulted in a pregnancy. 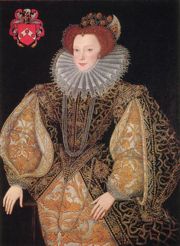 While the wedding was kept secret from the Queen, depositions were taken to ensure the legitimacy of the child, another Robert, born at Wanstead.

Among the witnesses were:

The marriage did not result in the loss of the Queen's favour when she learned of it, but Lettice was never forgiven.

Robert and Lettice had no more children but he took a keen interest in her children by Devereux.

Tension between England and Spain had been an ongoing issue throughout the reign and in 1584 William the Silent, Prince of Orange was murdered, resulting in chaos in the United Provinces. 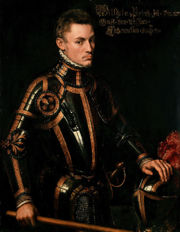 William the Silent, Prince of Orange

The Dutch looked to England for help and a book called "Leycesters Commonwealth" appeared on the continent, probably printed in Amsterdam, accusing Robert of murdering Amy.

Firm measures were taken to prevent the book from appearing in England and many copies were seized and destroyed.[14]

Elizabeth finally let Robert off the leash and he was dispatched thither under arms in which cause he mortgaged his estates to the sum of £25,000. On 25 January 1586 he accepted the offer to become Governor-General of the United Provinces.

The entire affair was a disaster and after the Battle of Zutphen during which his nephew, Sir Philip Sidney was mortally wounded, he was ordered home.[9]

At the time of the Spanish Armada in 1588 he was made Lieutenant and Captain-General of the Queen's Armies and Companies and was beside the Queen at Tilbury. However he was by this time ailing and set out for Buxton in Derbyshire to take the baths.

Robert died on 4 September 1588 at Cornbury Park in Oxfordshire, [9] having requested in his will that he be buried in the Collegiate Church of St Mary, Warwick. [2] 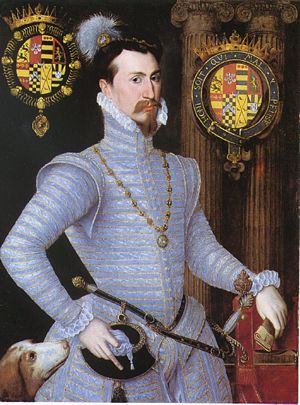 John Atkinson
Dudley-4654 and Dudley-1 appear to represent the same person because: These are profiles for the same person - same dates, there is mention in the biography of Dudley-1 that he had a relationship with Douglas Sheffiled (birth name Howard) and had a son Robert Dudley with her. These two profiles are duplicates - please merge them.
posted Jan 14, 2020 by John Atkinson