Robert Dudley, the illegitimate son of Robert Dudley, Earl of Leicester and his mistress, Douglas Howard was born on 7 August 1574. Although his father declined to marry Douglas for fear of how the Queen would react the child was acknowledged by his father though he parted from Douglas. In 1578 Leicester did marry, clandestinely, Lettice Knollys. Their son, another Robert, was Leicester's heir but died in 1584. Douglas married Edward Stafford on 29 Nov 1579 and went with her husband to Paris.

Robert was raised in every respect as the son of an Earl and educated at Christ Church, Oxford. He was with his father at Tilbury at the time of the Armada in 1588 but shortly afterwards Leicester died. By his father's will Robert inherited Kenilworth Castle but there was no title to go with it. Leicester's brother, the Earl of Warwick, died childless the following year and Robert inherited land in Denbigh and at Chirk but again no title. In 1591 he was contracted to marry Frances Vavasour but she married another man and was banished from court. Robert then secretly married Margaret Cavendish and was temporarily excluded from court. Margaret died in 1595.

In 1594 he set out on a maritime expedition to Guiana returning the following year having had moderate success and in 1594 joined the Robert Devereux, Earl of Essex (Lettice Knolly's son) in a raid on Cadiz. He was knighted for his services and shortly afterwards married Alice Leigh, daughter of Thomas Leigh and his wife, Katharine Spencer. The Queen died on 24 March 1603, to be succeeded by the Scottish King as James I. This meant a worrying re-distribution of power in England. It was in this atmosphere of uncertainty that he listened to Thomas Drury. Thomas claimed that Robert's parents had been secretly married and thus that Robert was rightfully Earl of Leicester and Earl of Warwick. Douglas Stafford was persuaded to depose that indeed she and Leicester had married in 1573 at Esher in Surrey. The matter was taken to Star Chamber in 1604, the claim vigorously denied by the widowed Countess of Leicester. On 10 May 1605 Star Chamber gave it's verdict: Leicester and Douglas had never been married. Robert left England forever in July accompanied by his lover, his cousin, Elizabeth Southwell, daughter of Robert Southwell and his wife, Elizabeth Howard. Declaring themselves converted to Roman Catholicism they were married at Lyon in 1606 although Robert's wife, Alice, still lived. Robert claimed that he had never legally married Alice owing to his pre-contract to Frances Vavasour.

His education and experience now stood him in good stead for, calling himself Earl of Leicester and Earl of Warwick, he gained employ in Florence as designer and builder of warships for Ferdinand I Grand Duke of Tuscany. In 1618 James I granted the titles of Leicester and Warwick to others. On 9 March 1620 the Emperor Ferdinand II acknowledged his claim to the Dukedom of Northumberland previously borne by his grandfather, John Dudley. There was no longer any possibility that Robert would ever return to England.

Elizabeth Southwell died in 1631 having borne him 13 children. Robert Dudley died on 6 September 1649 at the Villa Rinieri outside Florence and was buried at San Pancrazio in Florence. 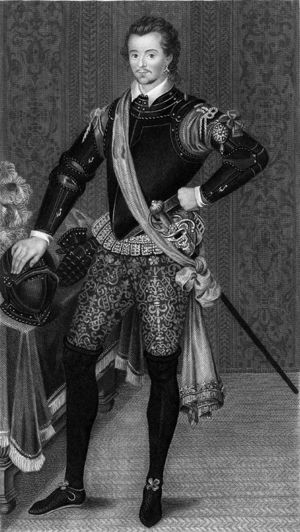 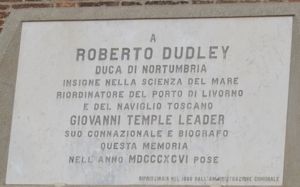 John Atkinson
Dudley-4653 and Dudley-2 appear to represent the same person because: These two profiles are the same person and according to WikiTree guidelines need to be merged. Same dates, both married to Elizabeth Southwell, difference in birth places but that shouldn't stop this merge from taking place.
posted Jan 14, 2020 by John Atkinson