Norman was born in Sheffield, England in 1919 and educated at 'High Storrs' Grammar School and Sheffield University. He graduated in 1938 with an Associateship in Metallurgy. After a year in the laboratories of Vickers, he did a four year cadetship with United Steel Co. Ltd. at their Steel plants, Peech and Tozer and Samuel Fox. He joined the Brymbo Steel Co. Ltd. in 1939 and was for four years foreman in the Electric Furnace Melting Department. Norman enlisted in the R.A.F. early in 1944 and was commissioned later the same year. He served with the Coastal and Middle East Commands and was for some time attached to the Armaments Design Department. On demobilisation he took charge of the Convertors and Electric Furnaces of K. and L. Steelfounders and remained with them until early 1948. He spent six months as Open Hearth Metallurgist with the Algama Steel Corpn. in Canada and visited other steelmaking plants in Canada and the U.S.A. and after his return to England visited steelworks in France and Belgium. He sailed for Australia in September,1948, and commenced duties with the Open Hearth Department at A.I.S. In December, 1949, he was transferred to the electric furnace department as Foreman Melter.

He then shifted to management consulting with WD Scott.

In 1953 he moved to Perth and joined Perth Technical College as a senior lecturer in metallurgy. He took an interest in management training and became head of department at the College in 1957. He studied part-time to gain an arts degree, majoring in economics, followed by an MBA in industrial relations. In 1964 he became Assistant Principal for Commerce and General Studies and was well liked for his lecturing methods, particularly in the field of economics.

Dufty received honours from a variety of professional organisations for his academic work and was a visiting professor at several American universities. He was also an adviser to federal and state governments, trade unions and employers in a variety of fields. His contribution to WAIT and Curtin was recognised when a lecture theatre on the Bentley campus was named after him.

Normans sporting interests mainly centred in swimming and water-polo, in which he represented the Sheffield University and the R.A.F. in Egypt and Hertfordshire.

In retirement he cultivated a large garden and orchard in the hills at Bickley.

Is Norman your relative? Please don't go away!

ask our community of genealogists a question.
Sponsored Search by Ancestry.com
DNA Connections
It may be possible to confirm family relationships with Norman by comparing test results with other carriers of his Y-chromosome or his mother's mitochondrial DNA. However, there are no known yDNA or mtDNA test-takers in his direct paternal or maternal line. It is likely that these autosomal DNA test-takers will share DNA with Norman:

Images: 2
Dorothy and Norman Dufty enrolling at the University of Western Australia in 1956 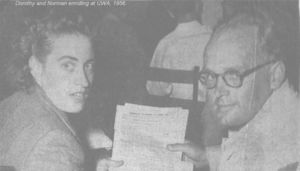 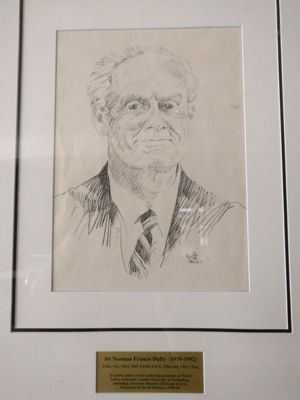 Norman is 20 degrees from Cecil B. DeMille, 24 degrees from Rosalie Neve and 19 degrees from Henry VIII of England on our single family tree. Login to find your connection.