d. 13 Nov 1093 Battle of Alnwick, attack allegedly to prevent coming Norman invasion, but he was ambushed by one of his Norman friends named Morel. His wife died three days after. It is assumed that they were both buried at the Monastery of Iona. Killed at the siege of Alnwick, Malcolm was buried first at Tynemouth, before being moved to Dunfermline. A character in Macbeth, as Malcolm, son of Duncan, the King of Scotland--although Shakespeare's chronology had little to do with real life.

Malcolm's rule was marked by many changes when bringing the culture and civilization of England to Scotland. In 1071 however, his reign overcome when Scotland was invaded by William the Conqeror of England who forced Malcolm to pay him homage at Abernethy in Perthshire.

Nov 1093: killed raiding Alnwick. Much of Malcolm's reign was spent pursuing his claim to Northumbria. On his last raid on Northumbria in 1093, he and his son were killed in a treacherous ambush. The king was 63. During his reign, Scotland became more European and cosmopolitan in outlook, due in large part to the Hungarian-raised Queen Margaret. Malcolm was succeeded by his son Edgar, who was killed in battle during the siege of Alnwick Castle, Northumberland, England. Malcolm lived in exile during the reign of his fathers murderer; Macbeth. Malcolm killed Macbeth in battle in 1057. [4]

(Royal Ancestry) Malcolm III, King of Scots, was killed by Morel of Bamborough at Alnwick, Northumberland 13 Nov. 1093. He was initially buried at Tynemouth, but his son, King Alexander I, later removed his body to Dunfermline, Fife (Scotland). His widow, Margaret, died at Edinburgh Castle 16 Nov. 1093, and was buried before the high altar in the church of the Holy Trinity at Dunfermline, Fife.

(Wikipedia) In 1250 (Margaret's) body and that of her husband were exhumed and placed in a new shrine in the Abbey. In 1560 Mary Queen of Scots had Margaret's head removed to Edinburgh Castle as a relic to assist her in childbirth. In 1597 the head ended up with the Jesuits at the Scots' College, Douai, France, but was lost during the French Revolution. Philip II of Spain had the other remains of Margaret and her husband Malcolm transferred to the Escorial in Madrid (royal mausoleum), but they cannot now be found. (https://en.wikipedia.org/wiki/Saint_Margaret_of_Scotland)

COD: killed at Alnwick during invasion of England


Memories: 1
Enter a personal reminiscence or story.
Mitchell Wawzonek
King Malcolm III of Scotland, also known as King Malcolm Canmore (c1031-November 13, 1093) and his wife Queen Margaret (c1047-November 16, 1093), who later became St. Margaret, also known as the Pearl of Scotland. They married in 1070 in Scotland and had six children. They lived in the royal palace at Dunfermline, Fife, Scotland and at Edinburgh Castle, Edinburgh. King Malcolm was son of King Duncan (who was killed by Macbeth...Malcolm was just nine, and sought refuge with his kinsmen on his mother's side Earl Siward Biornsson of Northumbria) and Queen Aelflaed of Northumbria. Through his father, King Malcolm was descended from the first kings of Scotland who in turn descended from the kings of Ireland. King Malcolm also was descended from the royal line of the Picts, the indigenous peoples of Scotland. Queen Margaret was daughter of Edward Atheling and Agatha and the granddaughter of King Edmund Ironside and Ealdgyth. Queen Margaret was of royal Saxon heritage and among her ancestors are the early kings of England, including King Alfred the Great. Her lineage also includes royal lines in Scandinavian and Germany, and according to the Icelandic Prose Edda, extends even to Asia Minor, to King Priam of Troy. More information on the lineages of King Malcolm III and Queen Saint Margaret can be found in history books as well as in the royal data bases of the Internet.

In 1053 Malcolm received military support from King Edward the Confessor of England and invaded southern Scotland, where he received considerable support from nobles in Lothian. On 15 August 1057 Malcolm met Macbeth at the Battle of Lumphanan, in Aberdeenshire, and Macbeth was killed. Macbeth was succeeded by his step son Lulach, a great grandson of Kenneth III. On 17 March 1058 Malcolm caught up with and killed Lulach, becoming Malcolm III in the process. His coronation took place at Scone on 25 April 1058.

Malcolm's first wife was Ingibjörg, the widow of the Earl of Orkney, and they had three sons before her death: Donnchad (Duncan); Domnall (Donald); and Máel Coluim (Malcolm).

In 1070 Malcolm married Margaret, the great-niece of Edward the Confessor. She had fled to Scotland with her brother Edgar the Atheling, the Anglo-Saxon heir to the English throne, after William I excluded him from the English succession.

Margaret's impact was dramatic. She favoured the Roman Catholic church to the Celtic Church and brought Benedictine monks to establish an abbey at Dunfermline. To allow her to feel more at home, Malcolm decreed that the language used at court should be Anglo-Saxon rather than Gaelic. As a result Malcolm III was the first to be called "King of Scotland" in his own time. Margaret also had built what is today called St Margaret's Chapel, in the highest part of Edinburgh Castle.

Malcolm and Margaret had eight children: Edward; Edmund; Ethelred; Edgar; Alexander; David; Edith or Matilda; and Mary. The extend of Margaret's influence on the future direction of the Scottish crown and of Scotland more widely can be seen by comparing the Gaelic names of the three children from Malcolm's first marriage and the absence of any Gaelic names among the eight from his second.

Malcolm was keen to take advantage of the disruption caused by the Norman conquest of England to further Scotland's interests. More charitably, he was also interested in rolling back the Norman invasion of England to place the "rightful" Anglo-Saxon heir, his brother in law Edgar the Atheling, on the English throne.

Malcolm's repeated invasions of northern England were driven back by William I, and in 1072 Malcolm was forced by William to sign the Treaty of Abernethy. This was a highly significant document, providing a basis for later claims of dominance of the English throne over the Scottish throne. At the same time Malcolm had to give up his eldest son Duncan as a hostage against his future good conduct.

When William I was succeeded by William II in 1087 (and Duncan was released as a hostage), Malcolm decided to invade England once more, this time with fatal results. He was killed in battle against the English at Alnwick, Northumberland on 13 November 1093, aged 62. His eldest son from his second marriage, Prince Edward of Scotland, died alongside him. Margaret was told of the deaths by her second son, Edmund. She died on 16 November 1093 and was was canonised in 1249.

On his death, Malcolm was succeeded by the joint rule of his brother, Donald III, and his second son by Margaret, Edmund. Malcolm was initially buried at Tynemouth, but in 1115 he was exhumed and reburied in Dunfermline Abbey, next to Margaret. 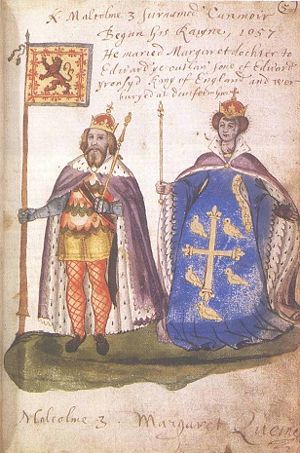 MARGARET AND MALCOM OF SCOTLAND

Leave a message for others who see this profile.
There are no comments yet.
Login to post a comment.
A. (Oltmann) Blacksher
Mary (daughter of Scottish King Malcolm III and Saint Margaret) married Eustace Maxwell III of Boulogne. Maxwell surname is associated with Caerlaverock Castle in Scotland. Descendants found in Chester, England, when it was one of three Palatine counties owned (Cheshire, Lancashire, Durham) by King William I, the Conqueror (formerly titled Duke of Normandy, France).

According to Wikipedia, Ethelred was the 3rd son of Scottish King Malcolm III and Saint Margaret.