He is named, and his parentage given, by Roger of Hoveden, who lists him third of the sons. The Chronicle of John of Fordun names "Edward, Edmund, Ethelred, Edgar, Alexander and…David" as the sons of King Malcolm and his wife. He succeeded in 1097 as EDGAR King of Scotland.

Florence of Worcester records that "clitorem Eadgarum" led an army to Scotland in [1097] to place "consobrinum suum Eadgarum Malcolmi regis filium" on the Scottish throne after expelling "patruo suo Dufenaldo". The reign of Edgar is ignored by Orderic Vitalis, who says that Alexander succeeded when King Donald was deposed.

Florence of Worcester records the death "VIII Id Jan" in [1107] of "Eadgarus rex Scottorum". The Chronicle of the Picts and Scots dated 1251 records that "Edgar mac Malcolm" reigned for 9 years, died "in Dunedin", and was buried "in Dumferline".

Edgar claimed the kingship in early 1095, following the murder of his half-brother Duncan II (Donnchad mac Maíl Coluim) in late 1094 by Máel Petair of Mearns, a supporter of Edgar's uncle Donald III (Domnall Bán mac Donnchada). His older brother Edmund sided with Donald, presumably in return for an appanage and acknowledgement as the heir of the ageing and son-less Donald.

Edgar received limited support from William II (William Rufus) as Duncan had before him; however, the English king was occupied with a revolt led by Robert de Mowbray, Earl of Northumbria, who appears to have had the support of Donald and Edmund. Rufus campaigned in northern England for much of 1095, and during this time Edgar gained control only of Lothian. A charter issued at Durham at this time names him "... son of Máel Coluim King of Scots ... possessing the whole land of Lothian and the kingship of the Scots by the gift of my lord William, king of the English, and by paternal heritage."

Edgar's claims had the support of his brothers Alexander and David — Ethelred was Abbot of Dunkeld, and Edmund was divided from his siblings by his support of Donald — and his uncle Edgar Ætheling as these witnessed the charter at Durham.

William Rufus spent 1096 in Normandy which he bought from his brother Robert Curthose, and it was not until 1097 that Edgar received the further support which led to the defeat of Donald and Edmund in a hard-fought campaign led by Edgar Ætheling.

Although Geoffrey Gaimar claimed that Edgar owed feudal service to William Rufus, it is clear from Rufus's agreement to pay Edgar 40 or 60 shillings a day maintenance when in attendance at the English court that this was less than accurate. In any event, he did attend the court on occasion. On 29 May 1099, for example, Edgar served as sword-bearer at the great feast to inaugurate Westminster Hall. After William Rufus's death, however, Edgar ceased to appear at the English court. He was not present at the coronation of Henry I.

Edgar was certainly not heir by primogeniture, as later kings would be, since Duncan II had a legitimate son and heir in the person of William fitz Duncan.[7] With Donald and Edmund removed, however, Edgar was uncontested king of Scots, and his reign incurred no major crisis. Compared with his rise to power, Edgar's reign is obscure. One notable act was his gift of a camel (or perhaps an elephant) to his fellow Gael Muircheartach Ua Briain, High King of Ireland.

Dunfermline Abbey, burial place of King Edgar.In 1098, Edgar signed a treaty with Magnus Barefoot, King of Norway, setting the boundary between Scots and Norwegian claims in the west. By ceding claims to the Hebrides and Kintyre to Magnus, Edgar acknowledged the practical realities of the existing situation.[9] Edgar's religious foundations included a priory at Coldingham in 1098, associated with the Convent of Durham. At Dunfermline Abbey he sought support from Anselm of Canterbury with his mother's foundation from which the monks of Canterbury may have been expelled by Domnall Bán.

Edgar died in Edinburgh on 8 January, 1107 and was buried at Dunfermline Abbey. Unmarried and childless, he acknowledged his brother Alexander as his successor. Edgar's will also granted David an appanage in "Cumbria" (the lands of the former Kingdom of Strathclyde), and perhaps also in southern parts of Lothian. David would later be known as Prince of the Cumbrians

Sponsored Search by Ancestry.com
DNA Connections
It may be possible to confirm family relationships with Edgar by comparing test results with other carriers of his ancestors' Y-chromosome or mitochondrial DNA. Y-chromosome DNA test-takers in his direct paternal line on WikiTree:

Alexander I of Scotland Image 2

Edgar I Dunkeld, King of Scotland 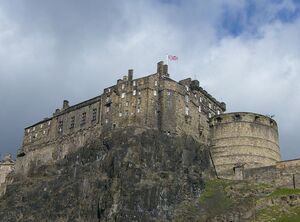 Leigh (Hoolihan) Murrin
Hi, I have cleaned up all the GEDCOM and formatting "detritus" from the 9 different multiple profile mergers (Database Error 811) for this profile as part of the April 2017 the clean-a-thon. I have preserved all of the biographic detail that has been given for Edgar - however, I have not tried to reconcile this information, profile managers should take a look and see if the different bio details shown here for Edgar could be combined into a single bio for him.
posted Apr 22, 2017 by Leigh (Hoolihan) Murrin

Edgar is 25 degrees from Donald Howard, 20 degrees from Julia Howe and 14 degrees from Henry VIII of England on our single family tree. Login to find your connection.