He was a brick maker; in 1660 he resided Portsmouth, Rockingham, New Hampshire, USA

Thomas saved 7 of the 8 of his children who were living at home when the Indians attacked on March 15, 1697. Martha, the youngest at only one week. was killed by the Indians. His wife, Hannah, was taken prisoner, but later escaped.

Was a hero on 15 Mar 1697 when the Indians made the attach upon his house, mounted his horse, and placing his seven children before him, conveyed them to a place of safety. His wife was the heroine who, on the night of March 30, 1697, twelve days after her capture, in the company with Mary Neff and Samuel Leonardson, dispatched ten Indians, and released herself from captivity.
"Tall spectres gaunt, whose garments drip with gore; From that infanticide the day before; Mount strange convulsions: whence that fearful wail?; T'was Hannah Duston, waking for the trail."

"DUSTON - This name is probably of Scotch origin, as it does not appear among the early English immigrants, and is first found in Haverhill, MA. It is best known, perhaps through the heroic exploit of Hannah Dustin, wife of Thomas Dustin, who receives further mention in the history of the Emerson family, to which she belonged. The family has furnished industrious, intelligent and useful citizens to NH, employed chiefly in agriculture and the industries. The spelling of the name varies at present usage.
1696 his house was besieged by Indians and he succeeded in saving seven of his children, but his wife was carried away captive. They had thirteen children."

"Thomas, Haverhill, perhaps son of Thomas of Dover, married 3 Dec 1677, Hannah Emerson, had 13 ch. before 1699, of which on 15 Mar 1697, 8 were at home, the youngest, Martha, a wk old, then killed by the Indians who carried away the mother and her nurse, and on 31st of same month she revenged her cause by killing 10 of the Indian family which had charge of these two prisoners with an English youth, Samuel Leonardson." 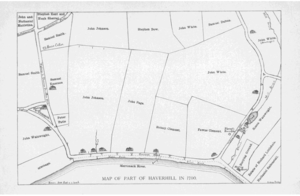 Jack Wise
Duston-7 and Dustin-119 appear to represent the same person because: Same person.
posted May 27, 2017 by Jack Wise
GeneJ X
Button-459 and Duston-7 appear to represent the same person because: The children of Elizabeth Wheeler and her first husband, Thomas Duston, were called out in the will of her father by only their given names. By that time, she had married second to Matthias Button. Early Button and Wheeler genealogists, unaware of the first marriage, mis-interpreted the parentage of the children in the will. Thus we find these Duston children sometimes in print as born to Elizabeth and her second husband. See sources and comments on profile of Elizabeth Wheeler/Wheeler-613 for more information.
posted May 15, 2014 by GeneJ X
M. (Stewart) H.
Plese go ahead with editing. Thanks.
posted May 15, 2014 by M. (Stewart) H.
GeneJ X
May we:

1. Update his LNAB to Duston

3. Remove the reference to vital dates.

All would help clear way for the unmerged match to be initiated as a merge.

This might might well be the grandson of John Wheeler, thus Thomas Duston with misplaced vital and LNAB.