Esther Dutch was the daughter of Osmund Dutch,[1] and Grace Dutch.[2][3] She was probably born in/around Newport, Rhode Island, as Anderson has her father arriving at Newport in 1639.

Esther married Samuel Elwell on 7 Jun 1658 in Gloucester, Massachusetts.[1][4] Samuel and Esther had the following children:[2][3]

From "The Geography and Genealogy of Gloucester Witchcraft":[5]

Esther Dutch, the daughter of Osman and Grace Dutch, was born around 1639 and married Samuel Elwell in 1658. Her parents lived at the Harbor at a place known as Dutch's Slough and were rather prominent in town affairs. Samuel Elwell's father Robert was also a distinguished citizen of the town. He lived at the Harbor at first, but most of his land was on Eastern Point, and he probably ended up living there. Samuel inherited his house and most of his land when he died in 1683. Prior to that Samuel had lived across the Harbor, near the Cut, in a house belonging to Robert that went to Samuel's son Samuel when Samuel (senior) inherited his father's house. The value of Robert Elwell's estate totaled £290 10s.

Story as seen on NBC's "Who Do You Think You Are?" with Sarah Jessica Parker:

Warrant filed against her in Salem Witch Trials along with Abigail Rowe and Rebecca Dike. They were accused of witchcraft by 17 year old Betty Hubbard, and killing their neighbor Mary Fitch. (Mary Fitch actually came down with a mysterious illness.) ... Luckily, the court dissolved before their case was taken and she survived the Salem Witch Trials.

According to the "Salem Witchcraft Papers," Volume 1: On November 5, 1692, an arrest warrant was issued for Esther Elwell and two others, Abigail Roe and Rebecca Dike, for committing “wickedly and feloniously sundry acts of witchcraft upon the body of Mrs. Mary Fiche of Gloucester." Hester Dutch was taken to Ipswich on October 30, 1692 along with two others for examination on the charge of witchcraft. All were released on November 7, 1692. Hester, due to sickness and poverty was, like her mother, "a poor distressed widow for many years."[6][7][8]

ask our community of genealogists a question.
Sponsored Search by Ancestry.com
DNA
No known carriers of Esther's DNA have taken a DNA test. 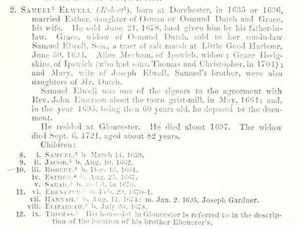 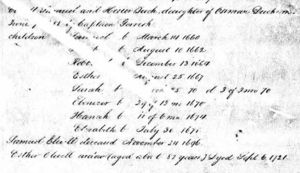