"The Alstons and Allstons of North and South Carolina" By Joseph Asbury Groves. (Google Books online)-[1]

F. M. Dwight was a particular favorite of his great-uncle, who, since he had no children, offered to make F. M. Dwight his heir if he legally changed his name to "Francis Marion." F. M. Dwight complied, becoming "Francis Marion." Unfortunately, because of some technical difficulties, the newly christened Francis did not inherit from his grand-uncle when the General passed on in 1795.

Francis's first wife, Charlotte Kirk, died in 1801 - within a year of their marriage - leaving him no children. He married her twin sister, Harriet Kirk, in the same year, which allowed him to hold onto the estate that had passed to him with his marriage to Charlotte. His second Kirk bride gave Francis eight daughters and no sons. 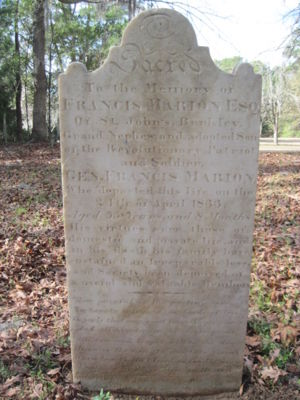