John Ebbott was born in England.

John is the child of Philip Upton Ebbott and Mary Ferret. [1]


His son Philip has gone to stay with his uncles William & Julius Bone, son Julius has just died, and son John who is with them ha just turned one year old.[2]

John Ebbott migrated from Cornwall, England to South Australia on “Gloucester ‘’ in 1852.

The Immigration of John Ebbott and his family

The whole family travelled together

When the Gloucester arrived in Australia, 284 people disembarked, including 113 children and infants; these were made up of 277 English, 3 Scots, and 4 Irish. The horrendous voyage had taken three and half months in total. The Gloucester experienced 25 deaths on board, a particularly high number, as the average voyage death percentage rate was 1.8 for a journey such as this. History tells us it was in the top eight of vessels out of the seventeen vessels that suffered more than 16 deaths at sea, accounting for five per cent of all ships arriving after 1848.[5]

After arriving in South Australia in May 1852 the family are next located in Victoria first to Glenuce and then on to Faraday in the Mount Alexander Shire, finally settling in Chewton, Victoria, Australia.

In Glenluce we believe that John bought land to farm. I appears that the family were in Glenuce until when records show John Ebbott of Glenuse purchasing land on the sixth day of March 1858[6] and then went on to purchase more land in Faraday in [7]

Between 1859 and 1861 it appears that times were very difficult "was farming on the Kyneton-Bendigo Road just south of Faraday when his farm and all the surrounding courtryside was completety burnt out leaving the family which only what they were able to throw down the well. At one stage his cattle were also devoured by plague."[8] His faith must have held in good stead as in Sep 1861 he was appointed to be one of the Trustees of the land reserved for Wesleyan Church purposes at Chewton. along with John Charles Thrum, James Trewortha, Charles Hawley, and Ralph Archbold.[9] In 1862 he sat on the School Committee for the Weslyan Common School No.153. Other members of the committee were Rev. I. Harcourt, Rev. J. B. Smith, John Ebbott (farmer - father of John Ebbott , Mine ManagerEbbott-6)), Francis Russell, C. Hawley, Edmund Baker, W. Trewren, and Ralph Archogold.

in 1863 he chaired a tea meeting on the afternoon of Good Friday "The Chair was taken by an old and valued friend on the Wesleyan cause in Fryer's Town, Mr. Ebbott, sen. In the opening the chairman briefly reviewed the history of Methodism in that locality, and contrasted the former place of worship with the present comfortable and elegant edifice."[10]

It appears in 1866 John Ebbott begins retirement selling off his land [11] This perhaps giving him more time to pursue his church activities.

John Ebbott's Obituary
"Our church in this circuit has lately suffered a great loss in the removal by sudden death of Mr John Ebbott, Chewton. The following brief record of the life of a worthy man and a devout Christian may not be unacceptable. He was born in the parish of Tremaine, Cornwall, in the year 1810. At the age of seventeen years he was converted to God, and became a member of the Wesleyan Church, in the communion of which he lived and died. The first care was to show piety at home, and although he felt it a severe trial to introduce the subject, he sought and obtained his mother's permission to commence worship in the family. The conversion of several of his brothers shortly afterwards rewarded his fidelity. He was soon called upon to exercise his gifts as a local preacher, and in his twenty third year was promoted also to the office of a class- leader; and in the diligent discharge of the duties of these responsible offices he served the church and glorified God for thirty five years. Having formed a very happy matrimonial alliance with her who now mourns his loss , his house was opened for class and prayer meetings in the neighbourhood where e the means of grace had no existence. Soon the attendance increased so as to required enlarged accommodation, and induce the erection of a church. Here he assiduously laboured as a class- leader for seven years. Sinners were converted to God, believers edified; and some are found at this day preaching the glorious gospel of the blessed God, at home and in the foreign field, who rejoice to acknowledge John Ebbott as their spiritual father. From this scene of successful toil he removed to another parish, where he entered upon a fresh career of self- denying Christian effort, and with more than ordinary success. He has been frequently heard to speak of this period of his life with devout gratitude to God , as distinguished by remarkable outpourings of the Holy Spirit, issuing in the conversion of sinners, and the augmented joy of the Church. About this time it pleased God to visit His servant with affliction, and thus to exercise his faith and patience. He was brought low by typhus fever,and for a time his life was despaired of, but through the Divine goodness of was raised up again; and years of active, joyous, and profitable labour in the vineyard of God were granted despaired him. A long illness, however had proved very prejudicial to his temporal interests; and with a view to the improvement of his circumstances, and providing for his young family, he imigrated to Australia.


In the year 1852, accompanied by his wife and children, he reached Adelaide. After a few months' residence there, he removed to the goldfields of Victoria, and settled first at Fryers Creek. In this place his zeal and labour in the cause of God were honour by the great Head of the Church; and his influence was felt in the various parts of the circuit. After spending a few years there, he removed to Mt. Alexander, and connected himself with the Church of Chewton. Here, in a great trial of affliction, when the plague devoured his cattle and fire consumed his homestead and his substance, his heart stood fast, trusting in the Lord. And as he drew nearer to the termination of his earthly course, his walk with God became closer, his zeal burned more ardently and his prayers in the family and public were marked by greater unction. His soul was evidently opening for glory.

About three months before his death he was attacked by serious illness. During this season of suffering he was the subject of mental depression , and sustained the fierce assaults of his subtle, invisible foe; God had taught his hands to write and his fingers to fight. He was not ignorant of Satan's devices; he resisted him, steadfast in the faith. "God" said he, "is my father, Jesus Christ my elder brother, and Heaven is my home." "For to me to live is Christ, and to die is gain." His fellowship was with the Father, and with his son, Jesus Christ.


Frequently he praised God with a loud voice, and now, with the much afflicted Patriarch, exclaimed, "I know that my Redeemer liveth,"etc. And now, with apostolic faith and triumph, cried "We know that if our earthly house of this tabernacle were dissolved, we have a building of God, a house not made with hands, eternal in the heavens." He recovered from this attack of illness, but did not regain his former strength. He was impressed with the feeling that his race was nearly run. Often he remarked that the pins of his tabernacle were fast falling out. On Tuesday before his death, he quoted in class, with deep emotion, the Language  :


'O that without a lingering groad, I may welcome word received; My body with my charge lay down, And cease at once to work and live.'


Three days afterwards, God called him home. On Friday morning, February 1, he went forth as usual to his work, returned home in the afternoon rather earlier than an usual, complaining of disposition; between nine and ten o'clock retired to rest, and fell asleep. Awaking about eleven, he sat up a few moments in the bed , suddenly fell back, and expired'


'We looked; he was dead! His spirit had fled. Painless and swift as his own desire; His soul undressed from her mortal vest, Steep'd into the car of heavenly fire, And proved how bright were the worlds of light, Bursting at once upon the night."


On Monday following, devout men carried him to his burial, and a large concourse of mourning friends and neighbours testified to the respect and esteem in which he was held.


Truly may we inscribe upon his tomb the language of Holy Writ- "Blessed are the dead which die in the Lord from henceforth; yea, saith the spiritt, that they may rest from their labours, and their works do follow them." - E.K.[12]

No more info is currently available for John Ebbott. Can you add to this biography? 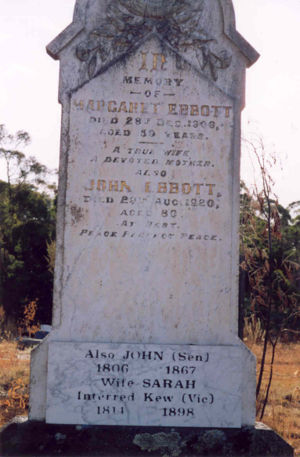