A previous version of this profile claimed, without sufficient source, that William was son of Thomas Eddye and Margaret Thomas. There is no proof of such a relationship and they have been detached.

Elizabeth became Queen of England in 1558 and reigned until 1603. William Eddye was probably born between 1558 and 1564 and died in 1616, so that basically his whole life was spent in that great period, the Age of Elizabeth. His lifespan was almost the same as Shakespeare who was born in 1564 and died in 1616.

William Eddye matriculated as “sizar” at Trinity Hall, University of Cambridge and received his B.A. In 1583. (A sizar is one who performs certain duties in part payment of his expenses at school.) In 1586 he received the degree of Master of Arts.

William was invited to accompany Robert Roades, as his assistant, to St. Dunstan Church, the Parish of Cranbrook in 1586. In Cranbrook, he met Mary Fosten, the daughter of John and Ellen (Munn) Fosten and in November of 1587 he married her. The first year of their married life was a very exciting one in the history of England, for it was the year of the war with Spain and the defeat of the great Spanish Armada. Cranbrook is not very far from the coast and must have taken an active part in providing men for the ships and other preparations for the defense of the coast on the English Channel.

On January 12, 1591, William was promoted from curate to Vicar of Cranbrook, a position he occupied for the next twenty five years until his death in 1616. His ability is demonstrated by this appointment which deemed him worthy to succeed the three previous brilliant and scholarly men who had held the office.

William married again and had a daughter, Priscilla. It is only John and Samuel who are of interest since they are the two who emigrated to America and founded the Eddy/Edy families in America.

In the latter part of the reign of Elizabeth, a desire for a simpler form of religious worship grew and spread. These dissenters were called Puritans. During the reigns of James I and Charles I, the persecution of these Puritans became so severe that a great emigration to the shores of New England began in 1620 and lasted until 1643. The first colony in New England was the Plymouth Colony with Governor William Bradford who had come with other Pilgrims on the Mayflower. (Our Edy connection to the Mayflower goes through our Carr – Wilsey – Tallman – Southworth line. Rebecca Southworth, mother of Steven Tallman, was doubly descended from John Alden who married Priscilla Mullin, daughter of Willliam and Alice Mullin, all from the Mayflower.)

The Plymouth Colony was then followed by the Massachusetts Bay Colony, headed by Governor John Winthrop, and established at Boston in 1630. John Winthrop was a cousin, by marriage, to John Eddy's wife, Amy Doggett. It would seem that the “Handmaid”, the ship John and Samuel Eddy/Edy sailed on and which left London August 10, 1630, was meant to land at Boston. However, after twelve weeks at sea the ship reached Plymouth harbour October 29, 1630 with her masts “spent” because the weather had been so severe.

The preceding was written by Jane Hughes, St. Thomas, Ontario, ancestor of Daniel & Sarah (Jones) Edy. Much of the information was derived from "The Eddy Family in America (1930)"[1]

In spite of many years of research, it has not as yet been possible to learn the names of the parents of William Eddye. Upon the first page of the Parish Register at the Church of St. Dunstan in Cranbrook, it is written by the hand of William himself, since his signature is at the foot of the page, that he was "borne in the cittie of Bristoll." The church registers of the towns about Bristol as well as those of Bristol have been searched in vain for his birth record. Among the many wills which have been found (abstracts of which will be found in Bulletin No. 8) the two following seem to be the only ones which might throw any light on the problem. The town of Northleach is in the eastern part of Gloucestershire and the city of Bristol in the southern part of the same county.[2]

"1. WILLIAM EDDY (1), the ancestor of all whose names are found numbered in this work, was born probably in Bristol, Eng., about 1550 ; educated at the University of Cambridge, St. John's and Trinity Colleges, from which he received his degree of Master of Arts ; m Mary Fosten Nov. 20, 1587, in Cranbrook, Eng. (she was dau of John and Ellen Munn Fosten, who were m Jan. 19, 1582); Ellen Munn Fosten, widow, m Andrew Ruck, a silk mercer, in Cranbrook, Jan. 11, 1574. He became Vicar of St. Dunstan's Church, Cranbrook, County Kent, Eng., in August, 1591, and so continued until his decease, Nov. 23, 1616. His first wife d July 18, 1611. He m second Sarah Taylor, widow, Feb. 22, 1614. All his children but one were by his first wife. He was a very methodical gentleman, a strict Episcopalian, judicious in his counsels, humane in his advice, and a reprover of immorality. Every way he appears to have been a diligent pastor over his flock, and has left a folio volume with eighty of its pages engrosed and illuminated, bearing evidence of his skill and taste, as well as care, in preserving the parish registers."[3]

William was educated at Trinity College, Cambridge University. He graduated in 1582/3 and was licensed as the cure at Staplehurst on August 24, 1587. He was "of Staplehurst" where he was married and when his first son was born. On January 12, 1591 he was inducted as Vicar of St. Dunstan's Church and held that office until his death. The old rectory where he lived still stands. The church was founded in 1177 but little of the original building remains, though the church is still in use. Three memorial windows and a tablet, in memory of Rev. William Eddye were erected through the bequest of Robert Henry Eddy of Boston. They were dedicated by Fredrick Temple, Archbishop of Canterbury in the Festival of St. Michael and All Angel's in 1902. The tablet reads" "In memory of his ancestor, the Reverend William Eddye, Vicar of St. Dunstan's Church from 1591-1616, whose sons, John and Samuel, and whose daughter Abigail, were among the Pilgrim settlers of New Engliand and there implanted for a numerous posterity, the religious principles here taught them. Rev. Eddye took no extreme position while at Cranbrooke, but in many ways the Puritan influence had great bearings on his life. He kept the Cranbrooke Register, which was begun in 1559. Cranbrooke is a small town 45 miles southeast of London.

DNA testing has been done on several descendants of William Eddye. The results show that he was not related to John Eddy of Woodbridge, John Eddy of Taunton, or Joseph Eddy of Michigan. Each family has a very different and distinct Y-DNA pattern. The EFA had a Y-DNA project at Ancestry.com for several years, many men tested there. Ancestry.com closed all Y-DNA services and support in September 2014. Men can still see their results within the DNA section of their account. The only Eddy DNA project is now at Family Tree DNA. A manual transfer can be done for $19. Or a transfer with a new test can be done for $54 (more then half off retail). You can view the project results here.

All Eddy Branches need Y-DNA testing to prove or disprove their connection to the Vicar William Eddye. Tree focus should be spent finding living male men with the surname Eddy or variant spellings and convince them to get tested. Then making sure that each man has a tree that has documented, and sourced proof of the child/parent relationship for each direct Eddy generation. These wikitree pages can be used as the storage location for those source documents with either a direct link or the actual image. For women to prove your connection, you need a Autosomal DNA test for yourself, combined with the Y-DNA test from the Male Eddy branch you are linked too, and your documented/sourced tree. [4]

No Proof of Parents

Thomas Addyes did not leave any male heirs and his estate went to nephews who were named Scott. He cannot be the parent of William Eddye.

Upon the first page of the Parish Register at the Church of St. Dunstan in Cranbrook, it is written by the hand of William himself, since his signature is at the foot of the page, that he was "borne in the cittie of Bristoll."

Probate was made of the will of William Eddie clerk late Vicar of Cranebrooke Archdeaconry Court deceased 4th day of the month of December A. D. 1616 by the oath of Phinees Eddie the Executor. Afterwards, namely the 8th day of the month of October 1617 by the Oaths of John Elmestone, George Martin, John Weller and Dence Weller the Probate was confirmed Parties to the Sentence Phinees the Son, Sara Eddie the widow, John, Samuell & Zacharias the Sons, Marie Eddie als Evernden wife of Simon Evernden, Abigal, Anne, Elizabeth & Priscilla Eddie the daughters. [7]

Reverend William Eddye was born about 1552 and was the Vicar of the
Puritan Church in Bristol, Somerset, England. He married Mary Fosten
and had 12 children. Two of his sons, John (born 1597), and Samuel
(born 1608) went to the American Colonies. John and Samuel Eddye left
London on the ship "Handmaid" on August 10, 1630. After a very stormy
voyage they reached Plymouth, Mass. on October 29, 1630.
Samuel Eddy was made a free man January 1, 1632. Samuel's wife
Elizabeth was fined for wringing out clothes on the Lord's Day on
October 7, 1651. The fine was ten shillings and was later remitted.
On May 1, 1660, Elizabeth was summonded to court to answer for
traveling (she walked) on Sunday to Boston from Plymouth. She
affirmed that she was necessitated to go on account of the illness of
Mistress Saffin. The Court excused her, but admonished her.
The Eddy Family Association has published a Geneology that is complete
from William Eddy (1552) through 1930.

Sponsored Search by Ancestry.com
DNA Connections
It may be possible to confirm family relationships with William by comparing test results with other carriers of his Y-chromosome or his mother's mitochondrial DNA. Y-chromosome DNA test-takers in his direct paternal line on WikiTree: 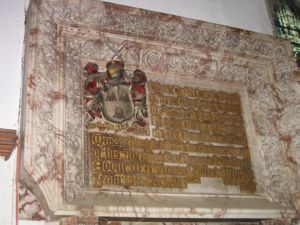 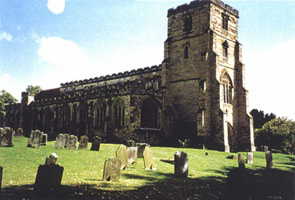 Robin (Felch) Wedertz
I realized that one faulty child...was uploaded by me! Way back in my larn'in days, I upload a GEDCOM...

I know the usual is to leave an explanation and disconnect the profile, but it was dead with no hits in years. I merged it into her sister, Mary, then worked on that profile a bit, fixing the mess I'd made of her! My newbie profiles need a revisit, thanks for bringing me back to one in need of attention! The other two are Southold Eddy-27 and William Eddy-30. Both have the same owner. I suggest we alert the owner, and disconnect the profiles. Any objections?

NOTE: This profile has a high number of profile managers. If you're not currently researching this profile, please consider downgrading yourself to Trusted List; you will still receive notifications of changes through your Family Activity Feed. Thank you.

T Stanton
Curious as to why Thomas Eddye/Addyes continues to be here as the parent when this appears to be proven impossible. Does this profile need to be projected protected...and by which project?
posted Sep 03, 2018 by T Stanton