Counsel and Assistant to the President for Domestic Affairs under President Richard Nixon. He was a key figure in events leading to the Watergate first break-in and the ensuing Watergate scandal. On April 30, 1973, Nixon fired John Dean, and Ehrlichman and H.R. Haldeman resigned.

Ehrlichman was born in Tacoma, Washington, the son of Lillian Catherine (née Danielson) and Rudolph Irwin Ehrlichman. In World War II, Ehrlichman won the Distinguished Flying Cross as a lead B-17 navigator in the Eighth Air Force. His father served in the Royal Canadian Air Force, and was killed in a crash in Torbay, Newfoundland (later Canada), on May 6, 1942.

Karen Hilliard was his 3rd wife. Ehrlichman died of complications from diabetes in Atlanta in 1999. 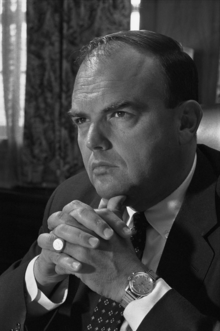 John is 35 degrees from Danielle Liard, 29 degrees from Jack London and 26 degrees from Henry VIII of England on our single family tree. Login to find your connection.