Science without religion is lame, religion without science is blind.
-- Albert Einstein, more ...

Albert Einstein is Notable.
Albert Einstein was born in the city of Ulm in Württemberg, Germany, on March 14, 1879 into a non-observant Jewish family.[1][2] Six weeks later his parents moved the family to Munich, where Albert spent most of his early years.[2] In 1894, Albert's family moved to Pavia, Italy (near Milan), but he chose to remain behind in Munich.[3]

In 1901 Albert received his diploma from the Swiss Federal Polytechnic School in Zurich, as well as Swiss citizenship.[2] In 1914, he returned to Germany as director of the Kaiser Wilhelm Physical Institute in Berlin, a position he held until 1933.[3]

After Hitler's rise to power, life for professional Jews in Germany became very uncomfortable. Albert and his wife, Elsa, moved to the United States and settled in Princeton, New Jersey.[4][1] In 1940 he became a US citizen.[3]

Albert Einstein died April 18, 1955 at 1:15 AM in Princeton Hospital at the age of 76.[2] His body was cremated and the ashes were scattered at an undisclosed place.[2]

"All truly creative minds go beyond the limitations of space and time and the commonally dysfunctional nature of the human mind. Albert clearly recognised his 'mystical' abilities in the sphere of science, as revealed in many quotations from his writings. He remained humble, despite becoming one of the most famous people, and spoke of "a grotesque contradiction between what people consider to be my achievements and abilities and the reality of who I am and what I am capable of." [Translation by Eckhart Tolle from the Source reference.]

1914 Appointed Professor at University of Berlin (without teaching obligations) and Member of Prussian Academy of Sciences. Separates from his wife, Mileva Maric - she returns to Zurich with the two sons. Signs anti-war "Manifesto to Europeans".[3]
1915 Joins pacifist "New Fatherland League". Completes logical structure of the General Theory of Relativity.[3]
1916 Publication of the General Theory of Relativity.[2]
1917 Writes first paper on cosmology. Appointed Director of Kaiser Wilhelm Institute for Physics in Berlin.[3]
1917-1920 Suffers from a liver ailment, a stomach ulcer, jaundice and general weakness - his cousin Elsa Einstein Loewenthal takes care of him.[3]
1918 Supports the new Weimar Republic in Germany.[3]
1919 Divorces his first wife, Mileva Maric. Bending of light observed during solar eclipse in West Africa and Brazil. First discussions on Zionism with Kurt Blumenfeld. Marries his cousin Elsa. Announcement at joint meeting of Royal Society and Royal Astronomical Society that Einstein's theories have been confirmed by eclipse observations. Sensational headlines in The Times and The New York Times : Einstein becomes a world figure.[3]
1920 Mass meeting against the general theory of relativity in Berlin. Appointed special visiting professor at Leiden University.[3]
1921 First visit to the U.S. with Chaim Weizmann: fund-raising tour for The Hebrew University. Lectures at Princeton University on theory of relativity. Awarded the Nobel Prize for Physics.[2]
1922 Completes first paper on unified field theory. Visit to Paris contributes to normalization of French-German relations. Joins Committee on Intellectual Cooperation of the League of Nations. Lecture tours in Japan and China.[3]
1923 Visit to Palestine: holds inaugural scientific lecture at future site of The Hebrew University in Jerusalem, named first honorary citizen of Tel Aviv. Visit to Spain. Lecture in acknowledgment of Nobel Prize in Göteborg, Sweden. Edits first collection of scientific papers of The Hebrew University.[3]
1924 The "Einstein-Institute" in Potsdam, Germany, housed in the "Einstein-Tower" starts its activities.[3]
1925 Trip to South America: Argentina, Brazil and Uruguay. Signs manifesto against obligatory military service. Joins Board of Governors and Academic Council of The Hebrew University.[3]
1927 Begins intense debate with Niels Bohr on the foundations of quantum mechanics.[3]
1928 Suffers temporary physical collapse - enlargement of the heart is diagnosed.[3]
1930 Intensive activity on behalf of pacifism.[3]
1930-1932 Three trips to U.S.: stays mainly at the California Institute of Technology, Pasadena, during winter semesters.[3]
1932 Supports conservation of the Weimar Republic Public. Correspondence with Sigmund Freud on the nature of war. Appointed Professor at The Institute for Advanced Study, Princeton University. Plans to divide his time between Berlin and Princeton. Leaves Germany for the last time.[3]

1933 Flees Germany in 1933 and declares that he will not return to Germany. Resigns from Prussian Academy of Sciences. Spends spring and summer in Belgium and Oxford. Emigrates to U.S. in September. Accepts a position at the Institute for Advanced Study in Princeton, New Jersey. "Why War?" published.[1][2]
1934 Collection of essays entitled "The World As I See It" published.[3]
1935 "The Einstein-Podolsky-Rosen Paradox" is published.[3]
1936 Elsa Einstein dies.[4]
1938 Publication of The Evolution of Physics.[3]
1939 Signs famous letter to President Franklin D. Roosevelt recommending U.S. research on nuclear weapons.[2]
1940 Acquires U.S. Citizenship.[4]
1943 Works as consultant with the Research and Development Division of the U.S. Navy Bureau of Ordnance, section Ammunition and Explosives.[3]
1944 Handwritten copy of his 1905 paper on special relativity auctioned for six million dollars in Kansas City, as a contribution to the American war effort.[3]
1945 Shattered by the extent of the Holocaust of European Jewry. Shocked by the nuclear bombing of Hiroshima and Nagasaki.[3]
1946 Becomes chairman of the Emergency Committee for Atomic Scientists. Expresses public support for the formation of a world government.[3]
1947 Intense activity on behalf of disarmament and world government.[3]
1948 Supports creation of the State of Israel. First wife, Mileva Maric, dies in Zurich. Intact aneurysm of the abdominal aorta disclosed.[3]
1949 Publication of "Autobiographical Notes".[3]
1950 Signs Last Will and Testament: Otto Nathan and Helen Dukas named co-trustees. The Hebrew University named as the ultimate repository of his personal papers. Collection of essays, "Out of My Later Years", published.[3]
1952 Offered presidency of the State of Israel.[2]
1953 Public support for individuals under investigation by the House Un-American Activities Committee.[3]
1955 Co-signs the "Russell-Einstein Manifesto" warning of the nuclear threat. Rupture of the aortic aneurysm leads to his death.[2]

Sponsored Search by Ancestry.com
DNA
No known carriers of Albert's DNA have taken a DNA test. 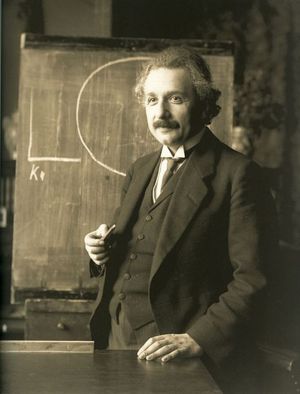 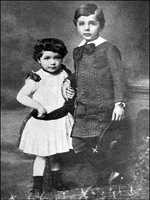 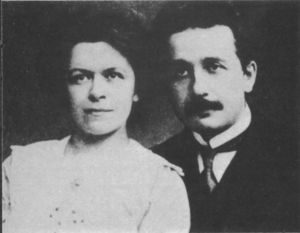 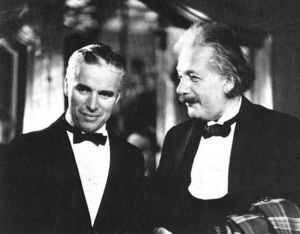 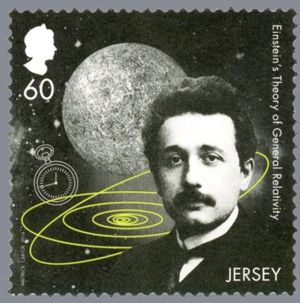 Lisa (Kelsey) Murphy
He spent some time working in the pattent office in Bern, Switzerland. During that time he spent a lot of time working on his own theories and would quickly hide his work whenever his boss came near his desk. He was sitting there at 28 when he had the thought of gravity. He then spent the next 8 years working it all out.

Lisa (Kelsey) Murphy
Many teachers, thought he was a daydreamer and one told him he would never amount to anything. Others, especially now, know he was a genius.

When he was in 6th grade they would have a medical student come for dinner on Thursdays. Max Talmud would come and visit and bring books to Albert to read. One of the best ones was a geometry book. It had about as much impact on Albert as the compass his dad had given him.

At 12 he was doing all different kinds of math, not only geometry but also algebra and others. He found it had the structure that made it logical, just like the music he loved.

In college he failed a physics class. This is ironic as he did so much in the field.

He continued his love for sailing and would sail a real boat, sailing when there was wind and writing notes when not.

Lisa (Kelsey) Murphy
He was born with a really big head and it scared his mom. She thought it was something wrong with him.

He grew up and everything had to be in his own time. He did not even speak until he was 3 years old, because he always thought in pictures instead of words. He also spoke differently so the maid called him "the dopey one".

He liked to play alone with puzzles, sailing his toy boat or feeding the pigeons. Just thinking was one of his favorite things to do.

At about 4 or 5 he got very sick and was in bed, when his father brought him a compass. It made a big impact on him and his life. He learned from it that everything had order and mystery.

Cards and blocks were turned into structures and tall buildings as he grew. He loved the violin and he saw the structure of the music.

Alison Gardner
There is a photo my grandfather took of Einstein speaking in Pasadena; probably at Cal Tech. He's very small in the photo, as it was taken from far away. If there's interest, I can see if my cousin can e-mail me a copy I could post.
posted Sep 26, 2018 by Alison Gardner

Einstein also spoke out on racial segregation and racism. Wouldn't it be good to add this to the timeline? https://www.snopes.com/fact-check/einstein-at-lincoln/

Lisa (Kelsey) Murphy
... reality. It is enough if one tries merely to comprehend a little of this mystery every day. Never lose a holy curiosity."

Lisa (Kelsey) Murphy
HE did not even speak until he was 3 and was the worst behaved student in school. He was fascinated by a simple compass that his father showed him when he was very sick while in grade school. He knew there was something invisible/hidden in how it worked. Everyone disagreed. He as called a foolish dreamer and they requested for him to drop out. He would hide pages with his thoughts on them when his bosses would go by him. he disagreed with the status quo and conventional wisdom. He knew everything was full of energy. His theory showed us the universe. He is quoted "The important thing is not to stop questioning. Curiosity has its own reason for existing. One cannot help but be in awe when he contemplates the mysteries of eternity, of life, of the marvelous structure of ...
posted Sep 14, 2017 by Lisa (Kelsey) Murphy

Helmut Jungschaffer
1. I would question the marriage date for Albert and Elsa. He would not have been able to marry without a divorce degree, and he only got divorced in 1919. The generally accepted date in June 2, 1919.

2. Baden-Württemberg came into being only on March 9, 1952. Hard to have been born there in 1879. Ulm at that time was in the Königreich Württemberg, and that was part of Deutsches Reich.

Albert is 34 degrees from Donald Howard, 29 degrees from Julia Howe and 32 degrees from Henry VIII of England on our single family tree. Login to find your connection.