After John Ragnar "Rags" Ekstrom and Iva Whitlock were married, they lived in Bismarck for a couple years. The 1914-1915 Keiter Directory of Bismarck shows that John R. Ekstrom resided at 607 (south?) 12th Street. Their first child, Ada, probably was born at that location. John was a traveling salesman according to the directory. The house that stands at the location was built too recently to have been the house where they lived. South 12th Street did not exist in 1914. It probably was simple 12th Street and renamed when Bismarck grew. The 1916-1917 directory states that John R. Ekstom moved to Washburn, North Dakota.

J. R. Ekstrom has seen a lot of history during his colorful life

A colorful career which has included blacksmithing, traveling as a musician with a street carnival, helping build highways and railroad sections, and assisting on boats plying the Missouri river has been that of J. R. Ekstrom to date.

As of the many positions that he has held, his present work as maintenance engineer at the Washburn school, where all the youngsters know him and affectionately refer to him as "Rags," is one of his favorites.

He has been faithfully on the job there, night and day almost, since 1929, except for a three year absence, and there aren't many of the students, present or from any period since he began,whom he doesn't personally know well.

Mr. Ekstrom, a resident of Washburn since 1895, has seen a lot of McLean county history-and Washburn history in particular-in the making.

Born in Sandviken, Sweden on June 9, 1892, he was brought to the United States, along with two other children, by his parents when he was just a year old. His father was an engineer, and left the Swedish steel town that had been his home for many years to bring his family to Bismarck,where he had a sister living.

Mr. Ekstrom's father found work on the railroad that was pushing its way westward and then in 1895 moved to Washburn where he became an engineer at the old Washburn flour mill. Established in Washburn, the senior Mr. Ekstrom set up his own blacksmith shop, where " Rags" learned the trade working summers while still a school boy.

Two brothers and two sisters were born in Washburn and the Ekstrom children attended their first classes in the Washburn Catholic church, the same one that is still being used for church services, where school was held until a regular building could be erected.

Mr. Ekstrom paints an interesting picture of early Washburn, telling that at that period there were approximately 150 persons living here. There were no roads as we know them, simply two-track affairs traveled exclusively by wagons or other horse-drawn vehicles, he says.

All trade was carried by ships on the Missouri until the railroad reached Washburn in 1902. Mr. Ekstrom worked as a youth on several of these boats and on the ferries, first the cable type and later those driven by gasoline engines.

While a youngster he had learned to play the bass horn, the cornet, and several other instruments, who organized and directed the first Washburn band. This talent led him later to join, at the age of 17, the Rice Brothers, an organization of several street carnivals. With the carnival, a kind of one-ring circus with tent shows and variety acts, he toured most of the bigger towns west of Bismarck.

He didn't exactly enjoy circus life, though, he says, as usually the show stayed in a town for only one night and performers were too busy to go out and see any of the points of interest.

Before joining the circus, he worked on a farm at Falkirk, and on the section crew for the railroad. Upon returning he found work at the old No. 1 coal mine at Wilton.

On Sept. 26, 1912, he wed Iva Whitlock, a Minnesota girl who had come to Washburn for a visit and had stayed. The couple moved to Bismarck where they lived for two years. In 1914, they returned to Washburn and Mr. Ekstrom resumed work in the flour mill. In 1916, the old flour mill was destroyed by fire, so Mr. Ekstrom went to work for the flour mill then operation at Underwood.

In 1917 Gus Gallbrecht built a new flour mill, so the Ekstrom, who now had four children, returned again to Washburn. This time Mr. Ekstrom remained at the mill until 1929, working during slack seasons on a ferry.

He joined the staff of the Washburn school just after the present heating equipment was installed and by now is quite an expert in handling the complicated-looking boiler equipment and doing minor repairs.

He really likes children and is interested in what they are interested in - one of the reasons he likes his present job so well and in turn - is so well liked.

The Ekstoms' own children are Mrs. Bernard Hall of Wilton, Glenn, now living in Rapid City, S. Dak., Alvin of Rodeo, Cal., all married and with families of their own, and Lyle, who is serving with the army in Germany and who recently wed a German bride.

The Ekstroms have ten grandchildren. One of them, Miss Phyllis Hall, now stays with them in their home in southeast Washburn while attending Washburn high school.The Washburn Leader, Washburn, North Dakota, Thursday, Jan. 14, 1954, p. 1)

He retired from his position at the Washburn school a few years after the above article was written.

After his wife died he moved to Hawthorne, Nevada, and lived with his sister, Lennie. However, he returned to North Dakota shortly before his death.

His funeral was held at the Washburn Methodist Church.

Is Ragnar your relative? Please don't go away!

ask our community of genealogists a question.
Sponsored Search by Ancestry.com
DNA Connections
It may be possible to confirm family relationships with Ragnar by comparing test results with other carriers of his Y-chromosome or his mother's mitochondrial DNA. However, there are no known yDNA or mtDNA test-takers in his direct paternal or maternal line. It is likely that these autosomal DNA test-takers will share some percentage (beta) of DNA with Ragnar: 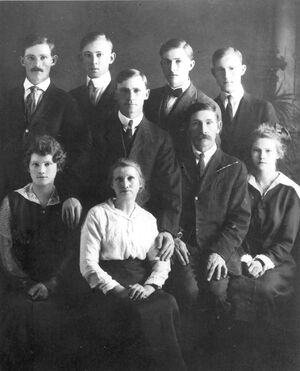 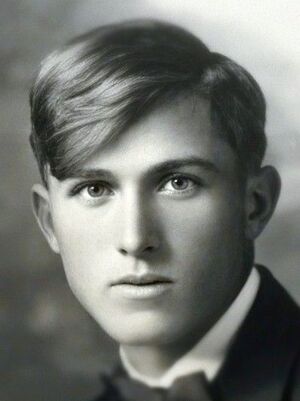