William Elgate was born about 1663 in Devon, England, a subject of the Kingdom of England. He was the son of William Elgate and Hannah Richards.

He was married to Sarah Keene [1] They were the parents of several children.

On February 21, 1721-22, Adam Hitch received an inquisition on his mill seat returned by Robert Martin, Sheriff of Somerset Co., no damage to him but damage to Mr. Elgate. See #3 Chan. PL Folio 588.

The mill here designated as Captain George Paris' grist mill was formerly known as Hitches, or Rockawalkin Mill, and was on a branch called Cottingham's Creek. The mills and lands adjoining were purchased by Levin Gale in March, 1730/31, and February, 1735/36, from Mary Cordry and William Elgate, respectively, (Somerset Court, Deed Liber O 17, page 299 deed Gale from Cordry; and Deed Liber O 19, p. 26, deed Gale from Elgate).[6]

The Protestant Episcopal, or Church of England, denomination was established in the Province by act of the Assembly June 9, 1692, “for the service of Almighty God and the establishment of the Protestant Religion in the Province.” It provided that “the Church of England should have enjoy all her rights wholly inviolable as now is or hereafter shall be established by law.” That also the Great Charter of England should be observed in all respects. A heavy fine was imposed for breaking of the Sabbath. The county justices were instructed to meet at their respective county houses, giving notice to the principal freeholders to attend, sometime before September 1; then with the advice of those attending, lay out their several counties into parishes. The freeholders of each parish were then to appoint six vestrymen, who with the first money available were to erect a church in each parish. A levy of forty pounds of tobacco was imposed upon each taxable inhabitant to meet the expense of building churches and chapels and to support the minister. The sheriff was allowed five per cent of the levy was making the collections. The vestry was empowered to accept gifts, prosecute claims and to supply vacancies. The four prominent freeholders called to attend the meeting with the justices at the court house on Back Creek with Daniel Hast, William Elgate, William Alexander and Mathew Wallis from Wicomico Hundred; Robert Collier, James Weatherly, John Bounds and Capt. William Piper from Nanticoke Hundred. [7]

William Elget wrote his will on Jan 31 1725/26 and it was probated in Somerset Co. on Oct 14 1738.
-To daughter Sarah Bird, land tracts Heculey and part of Elgatts Lott
-To granddaughter Katherine Hitch, d/o Hannah Hitch, tract Jeshimon and remainder of Elgatts Lott
-To Adam Hitch Sr. 12 pence
-To daughter Rebecca, 260a of tract Munsley which was called James Bready's Place and known as Long Point
-To daughter Ann Hall, 60a of tract of the plantation I now live, part Munsley and part Avers Policy running to Thomas Hall's place
-To daughter Katherine Duskie, remainder of Avers Policy joining Thomas Hall's place on Cottinghams Creek
-rest of estate to divide between Sarah Bird, Katherine Duskie, Rebecca Bready, Ann Hall and my beloved wife her thirds. Wife also to get thirds of the plantation, house and orchards during widowhood or until marriage
-Son in law Thomas Hall to be sole executor
Witnesses: Thomas Humphris, Purnel Johnson, Richard Driskell, Edward Macglamere (MdPrW-22:005)

An inventory of his estate was appraised in Nov 1738 by George Dashiell and Isaac Handy with nearest kin Thomas Byrd and Rebecca Bready. Largest creditors were Michael Disharoon and David Hall and Thomas Hall signing Jan 10 1738/39. (MdPrInv-23:511) His account was settled Jan 26 1739/40 with distributions to Sarah Elgate for her thirds, Sarah Bird, Thomas Hall for his wife Anne's part, Rebecca Bready, Moses Driskell for his wife's part, and Alexander Adams for funeral sermon among others. (MdPrAcc-17:379) [3]

Besides the children listed, another daughter, Ann Hall (born Elgate) was married to Thomas Hall.

DNA information can be found at the Category link for Common Genome of Descendants of Francis Bird. [1] 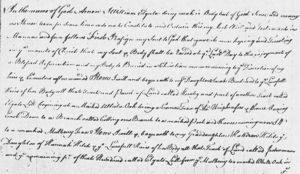 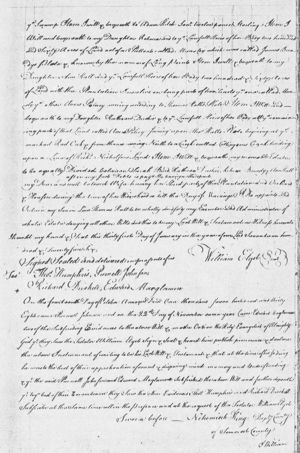 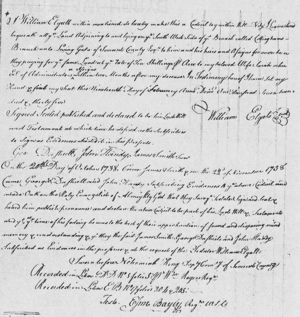