Maurits Cornelis Escher was born 17 June 1898 in Leeuwarden, Friesland in the Netherlands.[1][2] He is the son of Georg Arnold Escher and Sara Adriana Gleichman.[1]

In 1903, the family moved to Arnhem, where he attends primary and secondary school until 1918. He is a sickly child and is placed in a special school at the age of seven; he failed the second grade. Although he excelled at drawing, his grades were generally poor. He took carpentry and piano lessons until he was thirteen years old.

In 1918, he goes to the Technical College of Delft. From 1919 to 1922, Escher attends the Haarlem School of Architecture and Decorative Arts, learning drawing and the art of making woodcuts. He briefly studies architecture, but he fails a number of subjects (due partly to a persistent skin infection) and switches to decorative arts, studying under the graphic artist Samuel Jessurun de Mesquita

In 1922, Escher travels through Italy and Spain. He is inspired by the Italian countryside and the Moorish architecture of the fourteenth-century Alhambra.

Escher returns to Italy and lives in Rome from 1923 to 1935. While in Italy, Escher met Jetta Umiker – a Swiss woman, like himself attracted to Italy. They marry in 1924 and settle in Rome. Together they have three children: Giorgio (George) Arnaldo, Arthur and Jan.

Escher travels frequently, visiting many places that inspire his art.

He lives the last days of his life in an artists' retirement home in Laren, North-Holland and passeds away in a hospital in Hilversum, North-Holland on 27 March 1972.[2][3]. He is buried at the cemetery Nieuwe Begraafplaats in Baarn.[2]

Is M. C. your ancestor? Please don't go away!

ask our community of genealogists a question.
Sponsored Search by Ancestry.com
DNA
No known carriers of M. C.'s ancestors' DNA have taken a DNA test. 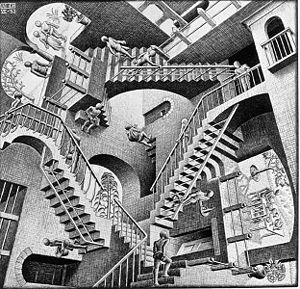 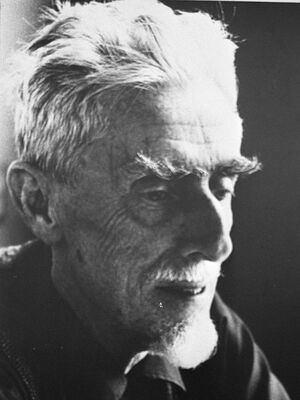