Burris was born in 1805 in Orange Co, NC., the son of Burris (Burroughs) Estes (Estridge) Sr and Martha "Patsy" Lloyd.
He grew up in a family of 3 boys and 6 girls (He named 2 of his sons after his 2 brothers: Tom & John, and both of his brothers named a son Burris).

In 1820-25 when Burris was 15-20 his father (Burris Sr) moved the family from North Carolina to Henry Co, Tn, where he had inherited his uncle Moses's bounty land from the government as a result of Moses' service in the Rev. War. (Henry Co. was formed in 1821).
A history of northeast Ark says, "Burris Estes [Sr] was an officer in the War for Independence, and had in the same army with himself eleven cousins of the same name and some of one father. He drew from the government 600 acres of land, and located his claim in Henry Co., TN, where he passed his last days."[1]
Here in Paris, Burris Jr married in 1825 to Martha "Patsy" Morris who was born in Nashville. They lived about 8 miles east of Paris in Henry Co. (Possibly in the Sunny Side or Oakland communities, or the Elkhorn area.)

His son, Tom, wrote in 1910: "Mother belonged to a Baptist Church somewhere from 6 to 10 miles east of Paris, in the then neighborhood of the Manly's, Randle's, Burton's, etc. I think the church was on a little sandy hill. Will some brother tell me if the church still stands? I remember the preacher's name was Browning."[2]

His parents both died in Tennessee.
He moved to Ark. in 1839 with his brothers, Thomas & John, and sister Martha & Lemuel Morris.

In July 1844 he bought 80 acres in Section 17 of Sharp Co (Twp 18N, R6W).
Since Ash Flat was in the south part of section 10, Burris (in Section 17) was abt 2 miles W-SW of Ash Flat. Seems like this would be on what is now Gin Hill Road—on the south side of the road, maybe about where it turns from west to south.
There were many more land purchases by Burris (though there was more than one Burris, so it's difficult to know which one).

He was a leading agriculturist and died leaving considerable property in land and slaves. He and his wife were members of the Baptist church.

David Spurlock (his son-in-law) was appointed administrator of his will. The case was transferred to Sharp County (from Lawrence) when Sharp County was created in 1868.

Martha died 9 years later (1872). The Estes family lived 2 miles west of Ash Flat and are probably both buried in Wiles Cemetery[4] on the north side of Ash Flat (abt 3 miles from their home), but there is no stone. Lots of Estes family were buried in this cemetery.

Two of their daughters were buried in the Shiloh cemetery (Anna Eliza in 1872 and Mary M. in 1882), but they both married Spurlock men and lived in the Liberty Hill/King's Mill neighborhood.

Is Burris your ancestor? Please don't go away!

ask our community of genealogists a question.
Sponsored Search by Ancestry.com
DNA Connections
It may be possible to confirm family relationships with Burris by comparing test results with other carriers of his Y-chromosome or his mother's mitochondrial DNA. Y-chromosome DNA test-takers in his direct paternal line on WikiTree: It is likely that these autosomal DNA test-takers will share some percentage of DNA with Burris: 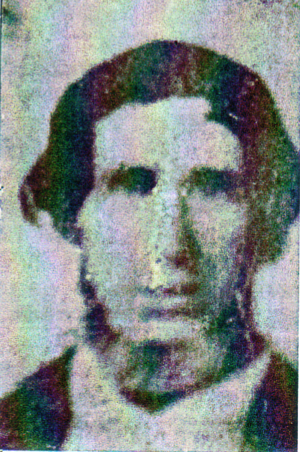