Husband of Mary (Unknown) Everard — married before 1636 in Massachusetts Bay

There were two Richard Everetts with wives Mary who were early settlers of New England. This Richard Everett is known only to have lived in Dedham. The other Richard Everitt (1612-1668), was married to Mary Winch and was in Springfield, and possibly Jamaica, New York.

'Richard Everard's New England career is well described in the 1902 Everett genealogy... which also mentions the death of eldest son Israel in Dedham, Massachusetts, on 4 April 1647.'

A man named Everard and his wife Mary were admitted into the church in Dedham on March 6, 1646/47, and their children were baptized 9 days later, on March 15.[5]

Richard had 4 children by his first wife, Sarah, and 14 more by Mary, most of whom produced grandchildren. Of Sarah's children, only Deborah had issue. His children by Mary were all born and baptized in Dedham, Norfolk, Mass.

From the Dalton Cluster, p. 275: 'Following their 1623 marriage in Woolverstone, Richard and Sarah (Dalton) Everard had children baptized there:

Of these children, young John was buried in Woolverstone 18 July 1629, less than two months old. Although there is no burial record for her, we believe that Sarah (Dalton) Everard may have died soon after John's birth. Richard is certainly not seen in Woolverstone after the burial of his youngest son, and we know from later records in New England that he had soon married another wife, Mary _______. Richard and Mary emigrated about 1636, bringing eldest son Israel, 1591 daughter Deborah, and perhaps a new son John.'

Children from second marriage to Mary Unknown before 1636:[6]

Richard Everett[11][1][12][4]
Genealogists Note: Although the name Everard seems settled for now, the Dedham Vital Record transcription of 1886 has the surname spellings in a number of ways. It appears the transcriber substituted a "u" for the letter "v" throughout much of the book. Other words, such as "Nouember" suffered similar errors. This error has been spread throughout many trees and documents. When trying to document this surname always look for spellings with the "u" as a "v". ie: Euerard, Euerit, Euerett, etc. 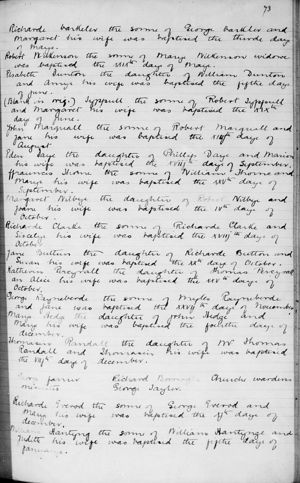 Leave a message for others who see this profile.
There are no comments yet.
Login to post a comment.
M Cole
I moved Mary Winch to the correct Richard Everitt (1612-1668) as specified in the Great Migration. With locations such as Springfield, and Jamaica, NY - her Dedham husband didn't make sense.
posted Jan 31, 2021 by M Cole
Chris Hoyt
Would someone add PGM as manager of Mary (Unk)'s profile. I have added her bio.

posted Oct 02, 2019 by Chris Hoyt
Chris Hoyt
Wife Mary Unknown has Winch parents, from previous merges. They should probably be removed. She should be PGM (added), as their son John was born 1636. She might need a PPP.
posted Oct 01, 2019 by Chris Hoyt
Chris Hoyt
I think all the children of Mary Unk are now attached to her. There are 3 children of Mary Winch - Bethia, Hannah and John born in 1635, died 1691 in New York, that should be detached from Richard, and ?left with Mary Winch.

And Mary Winch should be removed as a spouse.

Cheryl (Aldrich) Skordahl
Seems to me that the 3rd wife here, Mary Winch, belongs with Everitt-211 of Springfield then possibly Jamacia, L.I.

Chase Ashley
Per the Sanborn NEHGR article and the attached image, Richard, son of George and Mary, was baptized in Holbrook on 11 Dec 1597. Idk where the 1612 and 1588 come from, but they are pretty clearly wrong. The 1588 is not from Sanborn.
posted Sep 07, 2019 by Chase Ashley

David Mason
Genealogists Note: Although the name Everard seems settled for now, the Dedham Vital Record transcription of 1886 has the surname spellings in a number of ways. It appears the transcriber substituted a "u" for the letter "v" throughout much of the book. Other words, such as "Nouember" suffered similar errors. This error has been spread throughout many trees and documents. When trying to document this surname always look for spellings with the "u" as a "v". ie: Euerard, Euerit, Euerett, etc.

It wasn't until the 4th generation that the final spelling of Everett seems to have been finally settled within the family or at least in the Dedham Vital Record book.

Bob Fields
From Ewing-690: Comparing Everett-258 (L) and Everard-64 (R) for possible merger. Where does the birthdate of 1609 originate for Everett-258? My concern for this merger is the possibility that one is the uncle, the other the nephew and they both married Mary. Brenna
posted Mar 05, 2015 by Bob Fields

Carole Partridge
Everett-258 and Everard-64 appear to represent the same person because: Everard needs to be the final name. He was recorded as that when he joined the church in Dedham, and his children were baptized under that name. Current name should probably be Everett, because he seems to have settled into that name by the time he died.
posted Mar 04, 2015 by Carole Partridge