4th son of George and Elizabeth Weaver Everhart, born on the farm in Baltimore County (which became Carroll County in 1835), Maryland.

He married Nancy Hoke of Bottstown (now incorporated into city limits of York), Pennsylvania on 7 Sept 1830. She died 30 July 1874

As a young man David worked on the family farm but he later became a distiller. He lived in Manchester, Maryland for several years after his marriage and kept what was called in those days a "Wagon Tavern". Later he moved to Paca Street, Baltimore where he kept a hotel called the "Hand House". Two years later he moved to the Franklin House on the corner of Howard and Franklin Streets, and was his address at the time of his death.

According to records in the Greenmount Cemetery office, David was buried in the Duhurst vault. However, his name was not on the vault, and the vault was filled. Office records indicate that his wife later had he body removed. Three tombstones are visible in David's lot, but records indicate eleven persons are buried in that lot. One of the stones reads: (1) Father - David Everhart, Born in Carroll County, Md., Died 15th June 1867, in this 60th year of age." (2) Below on he same stone: "Wm. Jeptha Everhart, son of David and Nancy Everhart, Born (illegible) 1846, Died 1870." It may have been when her son William died that Nancy had her husband removed to a new plot with the son. Probably when David died the family had no burial plot so he was buried in the Duhurst lot, related by marriage to one of his sisters. There is also a tombstone for Nancy and for a son, the Reverand George Greenbury who died when he was 90!"

He and wife buried in Greenmount Cemetery, Baltimore, MY

Images: 1
Will of George Everhart Jr 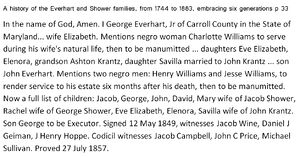