Ralph, the only child, joined the family business of outboard motors, Elto Outboard Motor Co. in 1927 and worked on development of a new four-cylinder motor, the Elto Quad.

After his father’s death in 1934, Ralph headed the company. Elto Outboard Motor Co. merged with Johnson Motor Co. in 1936 to become Outboard Marine & Manufacturing Corp. (OMC). Ralph became the President and Director of the Corp. He spent 55 years with the business expanding it to include boats, lawn mowers, snow mobiles and chain saws. For the outboard motor; Ralph took an active role in the development of modern fully enclosed engine styling, noise silencing advances, electric starting and remote controls.

The company's operations were located in many nations outside the United States.

Ralph married Marion Eleanor Armitage, who was born in 1911. They married Jan. 3, 1931. Their children: Sally Lou Evinrude and Thomas Evinrude.

During the war years of 1941 to 1945, Ralph managed the company’s production of war related products.

After the war’s end, Ralph (a single man by then) met Frances Langford (the famous entertainer) while she was performing in a nightclub. He married Frances Langford in 1955 and moved to Jensen Beach, FL. He also retired from the OMC business.

During retirement he and Frances did many philanthropic activities. The activities were centered in Florida and in Wisconsin (the Outboard Motors home base). He founded the Ralph Evinrude School of Marine Technology at the Florida Institute in Port Canaveral, Florida.

In March of 2001 the outboard assets of OMC, namely Johnson and Evinrude, were sold to Bombardier of Canada. The new company stated they would continue with the fine outboard motor tradition.

Sponsored Search by Ancestry.com
DNA
No known carriers of Ralph's DNA have taken a DNA test. 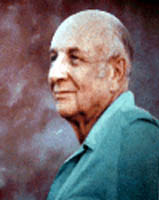 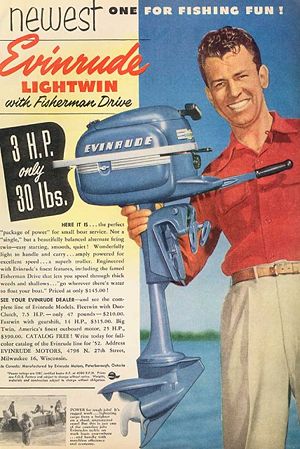