MR. W. A- EWERS One of five pioneers of the Bena district and an identity of the State, in the person of Mr William Alfred Ewers died at his residence, 'Sorrento', Drummuoyne. on the 6th Inst Deceased who was 50 years of age had a paralytic stroke some time ago but had recovered, sufficiently to resume work when he suffered another stroke which caused his death.

The late Mr. Ewers selected his "Bell Forest" property at Bena 29 years ago, and was shortly after wards joined by his brothers, Charles Prank, Alfred, George and Wallace. The nearest railway at that time was Forbes -- distance of 70 miles. The brother's had a very strenuous and trying time for some years, but by grit and perseverance they overcame many difficulties and made good progress. Mr W. Ewers possessed much ability, and. became a strong influence in the local branch of the Farmers and Settlers' Association,' of which he was Secretary for a number of years, also a member of the Executive He had a great grasp of land matters, and has been regarded as one of the foremost authorities in the State. On one occasion he nominated for the Lachlan Seat, but eventually withdrew — Messrs Kelly, Ferguson and Carroll going to the ballot. On the next occasion he con tested the seat, but suffered defeat at the hands of the late Mr Andy Kelly. He was then appointed valuer by the . Federal Government 19 connection with the Federal Land Tax, which position he held up to the time of his death. • We are informed that when ever the Federal Government had a contentious land case to deal with, Mr Ewers' was invariably sent for. During recent years, his Bena property has been managed by his brother Tom.

Messrs Frank and Thos. Ewers motored to Cootamundra on Friday night to catch h train for Sydney to be present at the Funeral. In addition to the brothers mentioned, deceased leaves one daughter a sister in W.A. and another in Queensland. Mr and Mrs C. F. Field of ChassafiekV' Ungarie, Mr and 1 Mrs S. Ludlow 0f Wamboyne and Mr and Mrs W.- E. Ludlow, of 'Ashton Park," Wyalong are uncles and aunts of the deceased. (2)

Is Will your ancestor? Please don't go away!

ask our community of genealogists a question.
Sponsored Search by Ancestry.com
DNA
No known carriers of Will's DNA have taken a DNA test. 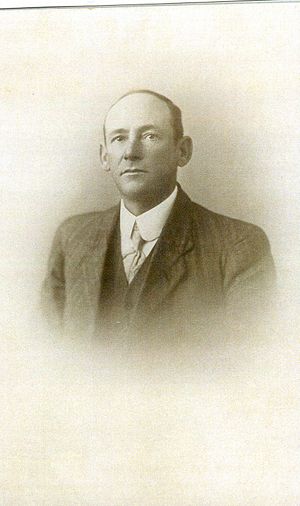