Cumberland Argus and Fruitgrowers Advocate (Parramatta, NSW : 1888 - 1950), Saturday 3 May 1919. [2] DUNDAS. DEATH OF EX-ALDERMAN EYLES. Mr. Alexander Eyles (an ex-alderman of Dundas and who sat in the council in the days when Mr. F. C. Cox was Mayor) passed away at Dr. Jenner's Hospital, Potts' Point, on the 1st of May. He was 75 years of age. His funeral (the arrangements for which were in the hands of Messrs. William Metcalfe and Co. took place yesterday (Friday), moving to the Carlingford cemetery. The deceased was the husband of Mrs. Hannah Eyles, of Marsden-street, Dundas, and father of Mrs. Willis (notice of whose husband's sad death, from influenza, we published on Wednesday last). Other children of the deceased are Messrs. Alexander, Herbert, Arnold, Frank Preston, Clifford and Milton Eyles, and daughters, Mrs. A. Wooster, the Misses Cissie and Clemie. The deceased gentleman was one of the veterans of the district, whose name was known throughout the whole of this part of Central Cumberland.

ask our community of genealogists a question.
Sponsored Search by Ancestry.com
DNA Connections
It may be possible to confirm family relationships with Alexander by comparing test results with other carriers of his Y-chromosome or his mother's mitochondrial DNA. However, there are no known yDNA or mtDNA test-takers in his direct paternal or maternal line. It is likely that these autosomal DNA test-takers will share DNA with Alexander: 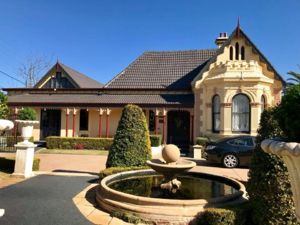 Alexander is 26 degrees from Katie Goodwin, 22 degrees from Wilbur Scoville and 19 degrees from Henry VIII of England on our single family tree. Login to find your connection.