Billie Holiday was a jazz singer and posthumous Grammy winner.

On March 28, 1957, Holiday married Louis McKay, a Mafia enforcer. McKay, like most of the men in her life, was abusive. They were separated at the time of her death, but McKay had plans to start a chain of Billie Holiday vocal studios, on the model of the Arthur Murray dance schools.

By early 1959 Holiday was diagnosed with cirrhosis of the liver. Although she had initially stopped drinking on her doctor's orders, it was not long before she relapsed.[89] By May of the same year she had lost 20 pounds (9 kg). Joe Glaser (Holiday's manager), prominent jazz critic Leonard Feather, photojournalist and editor Allan Morrison, and the singer's own friends all tried in vain to persuade her to go to a hospital.[90]

On May 31, 1959, Holiday was taken to Metropolitan Hospital in New York for treatment of liver disease and heart disease. The Federal Bureau of Narcotics, under the order of Harry J. Anslinger, had been targeting Holiday since at least 1939. She was arrested and handcuffed for drug possession as she lay dying, her hospital room was raided and she was placed under police guard. On July 15, she received the last rites of the Roman Catholic Church and died two days later, at the age of 44, on July 17, 1959, at 3:10 a.m., of pulmonary edema and heart failure caused by cirrhosis of the liver. In her final years, she had been progressively swindled out[by whom?] of her earnings, and she died with $0.70 (US$6 in 2017 dollars) in the bank and $750 (US$6,296 in 2017 dollars), which was a tabloid fee, on her person. Her funeral Mass was on July 21, 1959, at the Church of St. Paul the Apostle in Manhattan. She was buried at Saint Raymond's Cemetery in the Bronx.

Holiday was childless, but she had two godchildren: the singer Billie Lorraine Feather (the daughter of Leonard Feather) and Bevan Dufty (the son of William Dufty).

Is Billie your ancestor? Please don't go away!

ask our community of genealogists a question.
Sponsored Search by Ancestry.com
DNA
No known carriers of Billie's ancestors' DNA have taken a DNA test. 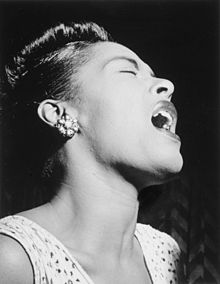 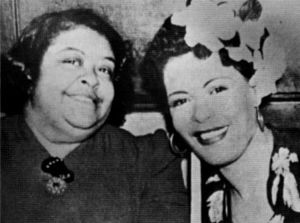 gravestone of Billie Holiday and her mother, Sadie Fagan 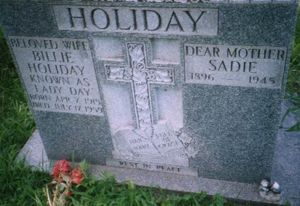 Leave a message for others who see this profile.
There are no comments yet.
Login to post a comment.
R Adams
Billie Holiday is remembered for her artistic genius, for her permanent influence on the Jazz tradition, and for the pitch perfect ability of her voice to convey human emotion.

Perhaps some direct statements like the one above could be added to the start of her profile to begin to balance out the unfortunate emphasis of the current version of her profile on negative aspects of her life. and to address why she is remembered as an iconic American vocalist to this day.

Thank you for the wonderful photos of her, by the way!