Died of typhoid fever in Brandon hospital with brothers James and George by his side. He was 22 yrs. Was buried in Elkhorn, Manitoba in the Old Elkhorn Cemetery behind the old hospital.

Sarnia Observer Sept 28, 1900 Vyner News The whole community was shocked to hear of the death of John Fair, Jr., the second son of our esteemed neighbour, who had been eight years pushing his fortune in Manitoba. He was taken to Brandon hospital about three weeks ago, suffering from an ordinary attack of typhoid fever. He progressed as favourably as possible, but finally took a bad turn and suddenly passed away. Some comrades were at his side ere he died, but his brother's James and George were unable to reach him, owing to the rapid termination of his life. He was buried at Elkhorn, where many friends shared with the brothers, their heavy sorrow. Great sympathy is felt for his mother and father here and his sisters and brothers who were so far away from his sufferings and death. They have the pleasant recollection, however, that their son and brother was a most obedient and affectionate young man, and all his schoolmates and friends will ever bear the same testimony. He was presented with a bible by these when he left, which is a token of the life he lived and the character he bore.

FAIR, John Edward - John Edward Fair was born in Camlachie, Ontario on Dec 15, 1871. He came west with his brother, James Henry, and filed for a homestead, NW 35-9-30 on April 6, 1892. He received the patent on Sept 16 1895. In the spring of 1898 John left Elkhorn, Manitoba with his brother James to explore the Klondike Gold Rush. John E. Fair died Sept 15, 1900 with typhoid fever and is buried in the Old Elkhorn Cemetery, near the old Creamery at Elkhorn. 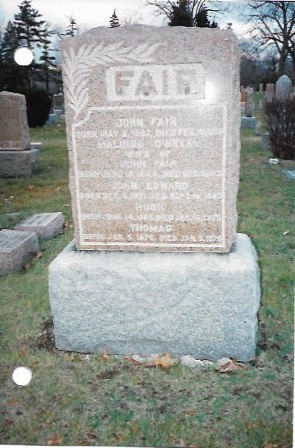