William Fairweather was born in Scotland in 1842 to John Fairweather, an Engineer. He was baptised on 30 October 1842 in Kirkden, Angus.

As a young man he was apprenticed for 5 years to Pearce Bros. of Lilybank Foundry in Dundee. With his apprenticeship complete, he went on to work in the yards of the Cunard Company in Glasgow, Liverpool, and America.

William married twice. His first was to Violet McEwan on 22 December 1869 at Walton on the Hill, Lancashire. William Smith and Jane ...? stood as their witnesses.

By 1871 William is living in Liverpool and employed as an Engine Fitter. He is widowed and has a 5 month old daughter Violet.

William next married Christina McKay at St Mary's, Kirkdale in Lancaster in 1875. Witnesses to their marriage were Annie Thornton and John Mackay.

They emigrated to New Zealand in 1876 on the clipper 'Rangitiki', arriving at Lyttleton. A new addition to the family had arrived during the voyage, John Fairweather, born on September 27.

William and his family settled in Christchurch for a time and he was employed by John Anderson & Co. He next headed over to the West Coast, to the Despatch Foundry Company in Greymouth. By 1879, William had established a business in Walter Street, Blenheim and was later assisted by his sons, John and William jnr. The premises covered an area of 1600 sq feet and the machinery powered by a 4hp engine built by William. His business was supported by settlers throughout Marlborough. William manufactured a product known as 'Fairweather's strippers' which were used in the flax industry. In 1905 he applied for a patent on his improved model.

He was widowed when Christina died in 1913 at the age of 73. William Fairweather died in 1917 age 74, at his home in Walter Street, Blenheim. He is buried at Omaka Cemetery. 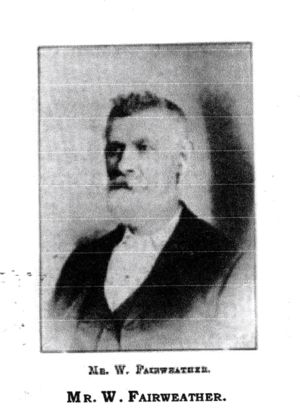 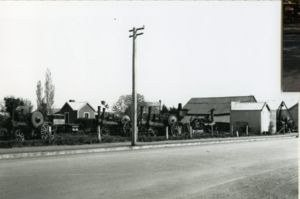