With the death of Mrs. Ann Greentree, the oldest Hawkesbury native has been taken. On Saturday last the old lady passed away to the land of "Shades and Shadows," after a long and noble life of 95 years. She was the daughter of the late Robert and Ann Farlow, of Freeman's Reach, who were two of the earliest settlers of the Hawkesbury, and her husband, the late Mr. Reuben Greentree, who died about 21 years ago, was one of the pioneer farmers of the district. She was married at St. Matthew's Church of England, Windsor, in the year 1825, and had a family of 8 children, those surviving her being: Mr. Reuben Greentree, J.P., Wilberforce ; Mr. George Greentree, Free- man's Reach ; Mrs. Wenban, Orange ; Mrs. G. Turnbull, Sackville; and Mrs. J. Gosper, Meranburn. She has sixty grand-children, and one hundred and five great-grand-children. Dur- ing the whole of her long life she had resided at Freeman's Reach and Wilberforce, and since the disastrous flood of 1867 - which the old lady could almost to the last give a stirring account of - she resided with her son, Mr. Reuben Greentree, at Wilberforce. For the past twelve months she has been ailing, but prior to that hardly knew what a day's sickness was. The funeral took place on Sunday afternoon last, and was one of the largest ever seen in Wilberforce. The coffin was a cedar polished, with silver mountings, and was covered with hand some wreaths. The remains were laid to rest in St. John's Church of England Cemetery, Wilberforce. The Rev. W. S. Newton, M.A., conducted the funeral service in the church and at the grave, and in making reference to the deceased, said there had been a baptism, a marriage, aud a death in the same family within the past week. Mr. T. Collison carried out the duties of undertaker.

Thanks to Brian Brown for starting this profile. Click the Changes tab for the details of contributions by Brian and others.

Is Ann your ancestor? Please don't go away!

ask our community of genealogists a question.
Sponsored Search by Ancestry.com
DNA Connections
It may be possible to confirm family relationships with Ann by comparing test results with other carriers of her mitochondrial DNA. However, there are no known mtDNA test-takers in her direct maternal line. It is likely that these autosomal DNA test-takers will share some percentage of DNA with Ann: 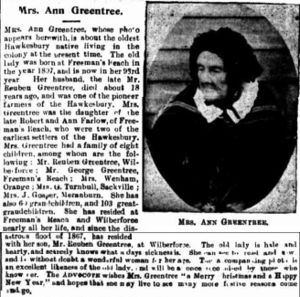 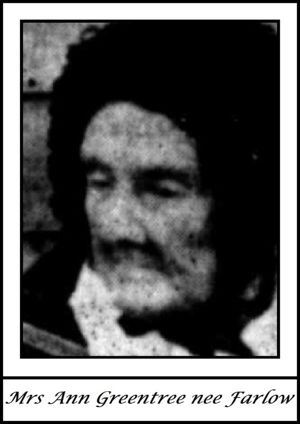