Father of Kenneth A Farlow and Albert Austin Farlow
Died 30 Aug 1950 at age 66 in Queensland, Australia

Hilton was an engineer. He was also a grifter and con man.

He married 1) Ethel Maude Greentree in 1906 at Dubbo, New South Wales.[1] Together they became the parents of Kenneth A Farlow and Albert Austin Farlow. Their union ended in divorce.

Hilton passed away on Aug. 30, 1950[4] and was buried as Hilton James Cooper at Lutwyche Cemetery in Brisbane, Queensland.

SIX MONTHS GAOL
Hilton James Farlow, alias H. J. Thompson; alias H.J. Cooper, charged. with false pretenses by obtaining the sum of £2 from A. W. Bolger, was sentenced to six months hard labor in Bathurst gaol at the Gulargambone Police Court' on Tuesday. Farlow, who arrived in this town as a seller of a certain make of car polish, did several car cleaning and polishing jobs, and during his stay made several purchases at Bolger's store, and paid cash. However, one day during the week he approached Mr. Bolger for £2, stating that he was waiting for his partner to arrive from Coonamble on the Saturday, when he would give him a cheque for the amount. That was the last seen of Farlow and a warrant for his arrest was issued. He was arrested at Liverpool and remanded to Gular under police escort and charged accor3Tngly. After evidence for the prosecution, he pleaded guilty. On going through his past records it was found that Farlow had been committed on 34 previous occasions on similar charges, and his record extended to other States, including Queensland, South Australia and Victoria.

Is Hilton your ancestor? Please don't go away!

ask our community of genealogists a question.
Sponsored Search by Ancestry.com
DNA
No known carriers of Hilton's DNA have taken a DNA test. 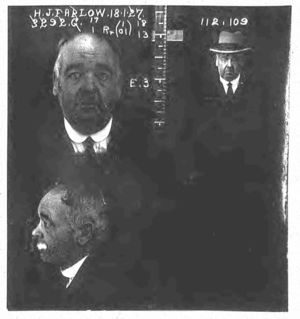