Kate Farmer was born about 1867, at Hamburg, Fremont County, Iowa. She was the daughter of George and Elizabeth (Chandler) Farmer. Kate's mother passed away in September 1868, and many undocumented sources claim she died while giving birth to Kate. Unable to care for the young child alone, Kate's widowed father sent her to live with her maternal grandparents, Joseph and Matilda Chandler.

In 1870, Kate was a three-year-old child residing on her grandparents' farm at Madison, Fremont Township, Iowa.[1] Kate's father appears to have been an honorable man, who was simply ill-equipped to take on the responsibilities of a newborn baby by himself. He remarried in 1871, fathered two more daughters, and then moved to Texas, where he died in 1876, when Kate was just nine years old. On 16 Aug 1879, her grandfather was appointed as her legal guardian.

In 1879, when Kate was about 12 years old, her grandmother also passed away - some unverified accounts claim it was a suicide. The following year, in 1880, Kate was residing alone with her grandfather, who had recently moved off the farm and was now living in the city of Riverton, where he worked as a grain dealer.[2] In 1885, Kate, now an 18-year-old young woman, was residing with her grandfather and his new wife at Riverton.[3] On September 3rd of that same year, Kate's grandfather filed a court document officially terminating his guardianship over Kate.

Three months later, on 30 Dec 1885, 18-year-old Kate married 24-year-old Thomas Edwin Morgan. (Her marriage license, which was witness by her grandparents, claims she was 19 years old, which does not agree with earlier census records.[4]) Thomas and Kate had a single child, Thomas Morgan Jr., who was born 31 Oct 1886, but survived only two days. This union was not a happy one, and after about five years of marriage, the couple separated. Some sources claim she had become involved with another man, but this can't be verified and appears to be pure speculation.

After leaving Thomas, Kate went to Chicago and, according to police reports, began heading west. She stopped first in Omaha, then went to Cheyenne, Ogden, and Sacramento, before reaching the home her father's brother, William T. Farmer, in Tulare County, California. There, she stayed for some time, before heading south to Los Angeles.

At some point along the way, according to legend, Kate had associated herself with a man who is said to have been consummate gambler. Some speculate this man was L. Anderson Bernard, a schoolmate of her husband's and the man whose wife she would later claim to be, but this has never been proven. Together, the couple is said to have developed an elaborate scam in which they would travel by train or stage, where Kate would flirt with rich gentlemen. When a man showed interest in her, she would tell him that she would gladly take the relationship further, but first he would have to beat her brother at a game of cards. The couple would then swindle the man out of his money. On one such excursion, the couple had an argument which ended with Kate walking out on him in the city of Orange.

When Kate arrived in Los Angeles, she found work as a housekeeper through an employment agency. She worked first in the household of attorney Robert M. Widney, then for a Mr. T.H. Hughes, before ending up in the home of railroad contractor Lewis Alexander Grant, at 917 South Hill Street. According to Mr. Grant, "Katie Logan" (as he knew her) was the best servant in his house. She attended strictly to her duties and never went out at night. But on 23 Nov 1892, Katie informed her boss that she had to travel to San Diego in order to sign some legal documents. Grant claimed she left in good spirits and promised to return in time to cook Thanksgiving dinner. When she failed to return as promised, he contacted the police and reported her missing.

Meanwhile, Kate had indeed arrived in San Diego, and had checked into the four-year-old Hotel del Coronado under the name “Mrs. Lottie A. Bernard, of Detroit.” She was traveling alone without any luggage, which quickly drew the attention of the hotel workers. The staff reported that she seemed ladylike, beautiful, reserved and well-dressed, but troubled and very melancholy. Though she mostly kept to herself, she was in frequent contact with a housekeeper who often visited her room (then Room #302; renumbered now as Room #3327). Kate confided that she had been diagnosed with stomach cancer and was at the hotel awaiting the arrival of her brother, who she claimed was a doctor. In actuality, Kate had no brothers and nobody can say for certain who she was waiting for – most speculate it was Anderson Bernard. It's also unclear whether she was truly ill – some suggest she was actually pregnant, perhaps with Bernard's child. However, as the days went by and nobody arrived, Kate's spirits began to sink even lower. Alas, she ventured into the city, where she purchase a handgun.

On the evening of November 28th, dressed in black with a lace shawl over her head, Kate went down into the hotel's exterior veranda with her gun in her hand, and stood to face the ocean in the middle of a cold storm. The next morning, her body was discovered lying on the steps to the beach by the hotel’s assistant electrician, her gun lying by her side. Police confirmed that she died of a gunshot wound to the head.

As Kate had used an alias to check into the hotel, it was quite a challenge for officials to determine her true identity. After they were unable to locate anyone in Detroit who matched her description, it quickly became apparent that Lottie Anderson Bernard was not her true name. Police had an artist go to Johnson & Company’s undertaking rooms to sketch the dead woman. The sketch was published across the nation, along with a description:

The unidentified woman was embalmed and placed in a window at the undertaker's, in the hope that someone local would recognize her.

Meanwhile, detectives investigating the disappearance of Katie Logan, Lewis Grant's missing housekeeper, inspected one of her trunks which was marked with the name "Kate Morgan". In the trunk were several photographs, a lock of hair (now known to have belonged to her mother), and a marriage certificate listing the groom as Thomas E. Morgan and the bride as Katie K. Farmer, both from Hamburg, Iowa. It was now clear that mysterious Mrs. Lottie A. Bernard was actually the housekeeper Katie Logan, and that Katie Logan was actually Mrs. Kate Morgan of Iowa. Police soon located Kate's grandfather, Joseph Chandler, who responded with a terse telegram which read simply, “Your telegram received regarding Kate Morgan, née Farmer. Bury her and send me the statement…”

Kate was buried at San Diego's Mount Hope Cemetery, following a brief service attended by several local women. No family or friend of Kate’s was present.

For more than a century now, a multitude of theories have been presented regarding the circumstances surrounding Kate's death. These theories are often filled with allegations of infidelity, mistaken identity, conspiracy and even murder, making it a challenge to separate fact from fiction. Perhaps this reflects the natural desire of crime and history buffs to find a glamorous alternative to what, in reality, is a rather simple and quite sad story of a depressed woman who killed herself.

Many believe that Kate Morgan is now enjoying a fine afterlife at the Hotel del Coronado, where her spirit is treated as an honored guest. To this day, people still travel the from around the world to spend a night in the room Kate occupied those five sad days in 1892.

ask our community of genealogists a question.
Sponsored Search by Ancestry.com
DNA
No known carriers of Kate's DNA have taken a DNA test. 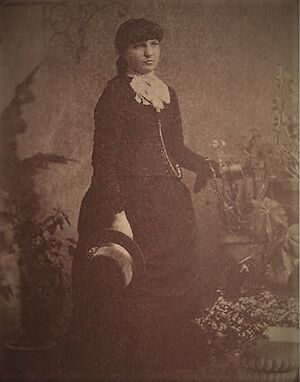 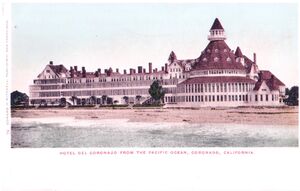 Newspaper Sketch of “Mrs. Lottie A. Bernard of Detroit.” 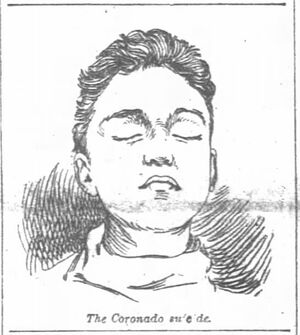 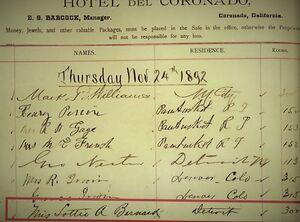 David Randall
My mother grew up in Coronado in the 1960s and lived for a time at the Hotel del while her house was being built. Growing up, we spent every summer visiting my grandparents in Coronado. We frequently visited the Hotel and were well aware of the stories of Kate Farmer. Researching her story was a truly fascinating endeavour.
posted Apr 01, 2022 by David Randall