Confederate Guerrilla Raider Born 1821 in either Clinton or Cumberland County, Kentucky, he was the oldest son of William Ferguson and Zilpha Huff. Champ (who was named for his grandfather) had black hair, was 6 feet tall and weighed about 180 lbs. He grew up mostly around the Clinton/Cumberland County areas, and in 1843 he married Ann Eliza Smith, the daughter of Jesse Smith and Sarah Crouch. Their marriage was short-lived, as she died in 1847, leaving him a widower.

He married once more in 1848 to Martha Owen. Their first child, a little girl, was born and died in 1849. They tried again and prior to the 1850 Census they had a second girl, Ann Eliza Ferguson (named after his first wife). It does not appear that they had any more children after Ann was born.

Champ started as a farmer in Kentucky then in Tennessee and developed a hatred of the Federal government and all those who supported the Union. He was an excellent shot with a gun. His violent behavior was well-known from an incident in 1958 when he was in Fentress County, Tennessee and cornered, facing mob justice. He lashed out with a bowie knife, stabbing one man to death and stabbing the constable until he was nearly dead and escaped, but his reputation as a ruthless man when cornered was set.

In April 1862, after assembling a unit of guerrilla troops in the Civil War, he and his unit didn’t follow any military discipline or order. He and his men were alleged to have attacked civilians supporting the Union and even may have decapitated prisoners and rolled their heads down the hillsides. He was apparently willing to kill elderly and bedridden men. His weapons of choice included a colt revolver and a Bowie knife, and it was believed that he may have killed around 100 Union soldiers and supporters. He was known as the most notorious Rebel, especially in Tennessee and Kentucky. He only surrendered with a promise of parole in May 1865.

He was tried by court-martial with a six-member military commission who tried him for war crimes. The trial was held in Nashville where he was accused of committing 53 murders from July 11, 1865 to Sept. 26, 1865. Ferguson claimed that any killing was done as a result of his unit just following their military duties and that he had not done anything that others in the war had not done. Two actions stood out among all the others. Reports were received that he may have killed a number of helpless hospitalized patients in their beds, but this proved difficult to verify. However, the killing of most of the members of the all black 5th U.S. Colored Cavalry including the white officers was confirmed.

Oct. 10, 1865 found guilty of the crimes. To be hung. His Statement to the verdict: "I am yet and will die a Rebel ... I killed a good many men, of course, but I never killed a man who I did not know was seeking my life. ... I had always heard that the Federals would not take me prisoner, but would shoot me down wherever they found me. That is what made me kill more than I otherwise would have done. I repeat that I die a Rebel out and out." Hung Oct. 20th, 1865 - buried in Tennessee.

Legend -- From the Cookeville Herald-Citizen, "there was a conspiracy between Champ and the military. The theory is that the military felt that Champ should not be hanged because many others as guilty as he had been paroled. The story is that the military enclosed the under section of the scaffold and that a ring of soldiers completely encircled it. When the hangman cut the rope and Champ dropped through the trap door, they quickly untied the loose knot and placed Champ in the casket alive. The casket was then placed on a waiting wagon which Champ's wife and daughter drove out of town. When they were out of Nashville, Champ climbed out of the casket and the three rode all the way to Indian Territory in Oklahoma, where they took new names and took up farming and ranching for a living." However, because the Union soldiers surrounding the gallows who were from the 15th U.S. Colored Infantry Troops, the tale of his escape seems unlikely.

Samuel "Champ” Ferguson was one of the most notorious guerilla fighters on either side of the Civil War. His partisan career is a prominent example of how personal revenge, criminal actions, and political allegiance all overlapped to motivate guerilla warfare in Tennessee. It also shows how Tennesseans were sharply divided between Confederate and Union sympathies in the highly contested region of the Cumberland Plateau.

Born near Albany in Clinton County, Kentucky, Ferguson moved to White County, Tennessee, with his family in the 1850s. According to local folklore, he made the move after Unionists in Clinton County drove him out and publicly humiliated his wife and daughter. At the outbreak of the Civil War, the Cumberland Plateau was extremely volatile in its divided loyalties. The mountainous terrain that made military control of the area almost impossible also made guerilla operations the preferred tactics of belligerent locals, such as Ferguson for the Confederacy and his nemesis David “Tinker Dave” Beatty for the Union. Largely due to the efforts of Ferguson and his men, the area around Sparta in White County where Ferguson lived remained under the control of Confederate partisans until the end of the war.

Shortly after the beginning of the war in 1861, Ferguson gathered a band of armed men and began attacking Union partisans and sympathizers. Though he was considered, in official military correspondence, a Confederate “Captain” with a “company” of men, he was usually not formally attached to the Confederate Army and conducted his own operations independently. The Confederate Army recognized the usefulness of these partisan ranger bands; Confederate General Edmund Kirby-Smith authorized Ferguson in 1862 to raise a cavalry company for operations around the volatile Kentucky-Tennessee border.

In 1861 and 1862, Ferguson was most associated with Captains Scott Bledsoe and J. W. McHenry, both of whom commanded companies attached to the Confederate Army. In June 1862, Ferguson joined Colonel John Hunt Morgan as a guide during Morgan’s first Kentucky raid. Ferguson was nominally under the distant command of Kirby-Smith until August 1864, when he was transferred to General Joseph Wheeler’s command, which was harassing Major General William Sherman’s march through Georgia and South Carolina. He returned northward to participate in the Battle of Saltville, Virginia, on October 2, 1864, during which he supposedly slaughtered wounded prisoners of war, many of them from the Fifth U.S. Colored Cavalry. One specific murder with which he was later charged was that of a Lieutenant Smith, shot by Ferguson in the Emory & Henry Confederate Hospital after the Saltville battle. For this crime, the Confederate Army jailed Ferguson in February 1865; he was released a few months later.

By war’s end, the federal government had branded Ferguson an outlaw. Ferguson and his supporters responded that his actions were within the boundaries of just warfare and self-defense. He surrendered in May 1865, believing that he would be treated according to Confederate surrender agreements and paroled. Upon arriving in Nashville, his co-partisans were released, but he was arrested and tried as a guerilla. The controversial trial, which took place from July to September 1865, was a sensation among Nashville citizens and newspaper journalists. The defense, led by Judge Jo Conn Guild, maintained that Ferguson was a captain in the Confederate Army and should be paroled as such. The prosecution, led by Judge Advocate A. C. Blackman, claimed that, as a guerilla and outlaw, he acted outside the bounds of the army. Ferguson was charged with fifty-three counts of murder, which rested entirely on the evidence of a long line of eye-witnesses for the prosecution, including Beatty and several of Ferguson’s friends and relatives. Most of the witnesses subpoenaed by the defense failed to present themselves, with the notable exception of General Wheeler, who testified that Ferguson was indeed considered a Confederate officer. The military commission decided that, since Ferguson was not paroled, he was not to be accorded the protection of army status; he was sentenced to be hanged.

The execution took place in Nashville on October 20, 1865, with Ferguson’s wife and child in attendance. Champ Ferguson was one of only two Confederates who were executed by the Union Army, the other being Henry Wirz, commandant of Andersonville Prison. Ferguson’s last wish was to be taken back to his home beside the Calf Killer River in White County, Tennessee, which was granted. His grave now resides in France Cemetery, north of Sparta.[1]


Memories: 1
Enter a personal reminiscence or story.
Alice Luckhardt
Wanted to be buried in Rebel soil.

Was buried in Tenn.

posted 15 Nov 2008 by Alice Luckhardt
Login to add a memory.
Is Champ your ancestor? Please don't go away!

ask our community of genealogists a question.
Sponsored Search by Ancestry.com
DNA
No known carriers of Champ's DNA have taken a DNA test. 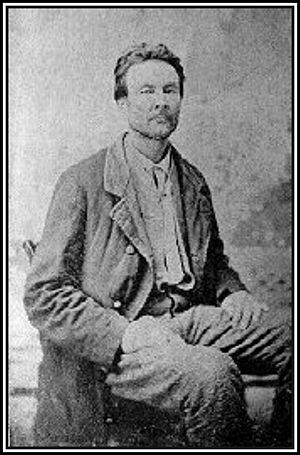 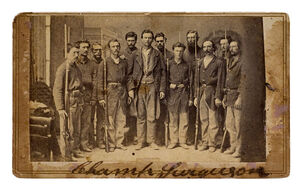 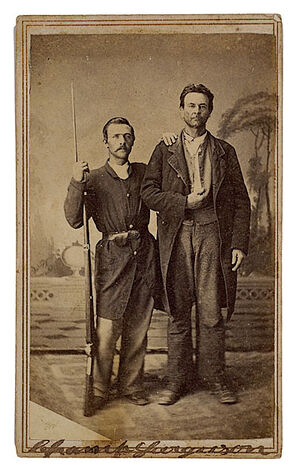