Extract from Wikipedia Kathleen Mary Ferrier, CBE (22 April 1912 – 8 October 1953) was an English contralto singer who achieved an international reputation as a stage, concert and recording artist, with a repertoire extending from folksong and popular ballads to the classical works of Bach, Brahms, Mahler and Elgar. Her death from cancer, at the height of her fame, was a shock to the musical world and particularly to the general public, which was kept in ignorance of the nature of her illness until after her death. The daughter of a Lancashire village schoolmaster.[2]

Married Albert Wilson in November 1935[3], but her marriage was annulled in 1847 without having any children.

Her brother George emigrated to Canada to become a farmer and sister Win became a teacher in London.

Is Kathleen your ancestor? Please don't go away!

ask our community of genealogists a question.
Sponsored Search by Ancestry.com
DNA
No known carriers of Kathleen's ancestors' DNA have taken a DNA test. 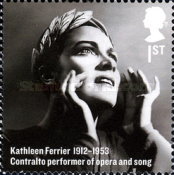