Despite the title and given name by which he is best known, Don Juan Filhiol was not a Spaniard but rather a Frenchman who served the Spanish colony of Louisiana in the late eighteenth century. His most noted accomplishments are associated with the European settlement of the Ouachita River Valley and include the founding of the Poste d’Ouachita and Fort Miro, which later became the city of Monroe. Early Life He was born Jean Baptiste Filhiol in 1740 (variously reported as August 1 and September 21) in the town of Eymet, France, near Bordeaux. His parents, Francois Filhiol and Anne Marie Teyssonniere, were well-to-do cloth merchants and Calvinists. Don Juan Filhiol stated that he spent five years of his early life in the Allemands (present-day Germany). As Protestants subject to persecution by the ruling Catholic church, the Filhiols may have sent their young son to this region for safety. In 1763, at 23 years of age, he left France to seek his fortune in the vibrant French colony of Santo Domingo (present-day Haiti). Filhiol’s activities on the Caribbean island are unclear, but he may have served as a militia officer and engineer. In 1779 he decided to return to France via Philadelphia, Pennsylvania; he hoped to take passage with a French squadron. Literally missing the boat in Philadelphia, he traveled instead to New Orleans, arriving in time to assist Don Bernardo de Galvez’s military ventures in West Florida and Baton Rouge against the British. For this service he was commissioned a captain in the Opelousas Post militia. While at Opelousas Post, Filhiol married the young widow Francois Poiret Berqueville on March 15, 1782. Filhiol’s commendable service soon led to his recommendation by provisional governor Esteban Miro to establish the Poste d’Ouachita on the Ouachita River and function as its commandant. The Ouachita Years Along with a commission to establish the new Spanish outpost, Filhiol received a long, detailed set of orders to guide his activities within his jurisdiction. Foremost were directives to assemble the polyglot of scattered inhabitants into civilized settlements; to bar Americans, English, and other undesirables from the Spanish-controlled region; and to promote harmony with the Native Americans. His efforts to address these charges resulted in mixed success. In 1783 Filhiol departed New Orleans via keelboat for the long, difficult journey with a few soldiers and slaves, a new wife, and provisions. The entire distance was upstream through the Mississippi, Red, Black, and Ouachita Rivers. A sparsely inhabited wilderness, the entire Ouachita District held a non-Indian population of only 207 in 1785. Filhiol first established his settlement at Ecore-a-Fabry (present-day Camden, Arkansas). Two years later, in 1785, he relocated downstream to the centrally located Prairie des Canots, now within the present city limits of Monroe. There, on both sides of the Ouachita River, he surveyed his personal land grant from the Crown and established his home for the remainder of his life. Filhiol’s word was law, and he soon got down to the business of governing his realm. His constituents were mostly free-spirited hunters without permanent dwellings who possessed a disdain for authority of any type—not the characters one would choose as model citizens for a productive, civilized settlement. Among his early decrees, Filhiol divided the district into two military sections, one at Ecore-a-Fabry and the other at Prairie des Canots, where all men of military age were required to serve and drill regularly. His objectives were to enhance the security of the valley from Indians and English intruders and to induce people to move to settlements where agriculture could be promoted. Later, as a further incentive, he sponsored the construction of a fort on his own property that could serve as refuge for families against Indian attacks. The palisaded fort was built using mostly Filhiol’s personal resources and named Fort Miro in honor of the governor. Filhiol’s actions were not popular with many residents who wanted to maintain their old lifestyle. His writings reflect his frustrations with those “living a life of the greatest independence, placing work in horror, knowing hardly if they were Christian.” In retrospect, his administration was considered fair and productive. He introduced a degree of law and justice to reluctant subjects. He donated a large square of his personal land for the eventual construction of a courthouse. He worked diligently to maintain the uneasy peace with Indians in the Ouachita Valley. Construction of Fort Miro established the permanency of the post, and the place resembled a bona fide village by the end of the 1790s. Filhiol served as commandant of the Poste d’Ouachita for fifteen years and retired in 1800 to continue working as a productive member of the community. During his tenure, three children were born to him and Francois: Jean Joseph, Marie Barne, and Edmond Landry Grammont. Don Juan Filhiol died on September 28, 1821, at eighty-one years old. He was buried on his plantation near the Ouachita River in present-day West Monroe. Author: Kelby Ouchley [1]

ask our community of genealogists a question.
Sponsored Search by Ancestry.com
DNA
No known carriers of Jean's DNA have taken a DNA test. 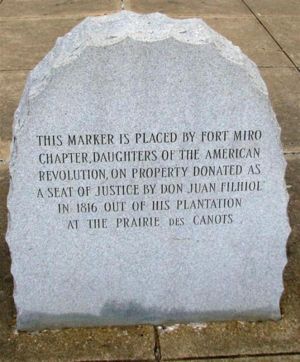