Wilhelm Fischer was born 1846 in Königsbach, the 9th child, the 3rd Wilhelm, and the first son to survive infancy, of Johannes Fischer and Agnes Köhr . In order to keep him out of the German military, his parents sent him to New York City in 1864 where he became a butcher and changed his name to William.

Ironically, in 1871, after the death of his parents, William joined the US Army, served and fought in the Indian Wars from Texas to North Dakota. He became a sergeant, and was wounded in 1886 by a fellow soldier in an accident while he was tending the targets on the firing range. He later had periods of illness due to exposure to the elements while in the field. William retired from the US Army upon the completion of 20 years service in 1891.

Two months after his discharge from the military, he married Sarah A. Trisler in Ripley, Ohio, and had 3 daughters with her between 1892 and 1898. The youngest and oldest daughters were born in Cincinnati, Ohio. The middle daughter was born in Chicago, where the family went while William was working at the World's Fair of 1893. In 1898, William could no longer work due to the cumulative effect of his Army injuries. He applied for and received a disability pension until his 1916 death in Cincinnati. His death certificate gave his cause of death as Bright's disease, a kidney disease, attributed to his Army service.

Summary of US Army Service

William joined the US Army 20 Nov 1871 in New York City. He fought in several battles with the 4th Cavalry Regiment during the Indian Wars.

Jan 1881 Re-enlisted at San Antonio, Texas as a private, assigned to:

ask our community of genealogists a question.
Sponsored Search by Ancestry.com
DNA Connections
It may be possible to confirm family relationships with William by comparing test results with other carriers of his ancestors' Y-chromosome or mitochondrial DNA. However, there are no known yDNA test-takers in his direct paternal line. Mitochondrial DNA test-takers in the direct maternal line: 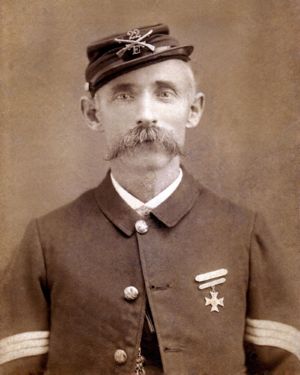