Actress best known for her portrayal of "Princess Leia Organa" from the Star Wars franchise. She was also a noted comedienne and author.[1]

Carrie Frances Fisher was born 21 October 1956 in Beverly Hills, California to Eddie (Tisch) Fisher and Debbie (Reynolds) Fisher.[1][2] Both of her parents were entertainers, making her known as "Hollywood Royalty".[1]

Carrie was married to pop singer Paul Simon for a year. They had no children. Their time together inspired Simon's composition, "Hearts and Bones".[1]

Carrie had a long-term relationship with talent agent Brian Lourd. Together, they had one child, Billie Catherine Lourd. Billie has gone on to be an actress like her mother.[1]

Carrie started off acting at age 15 in the Broadway show, "Irene" with her mother.[1] Her next role came in the movie, "Shampoo", but Carrie's big break into the entertainment world in her own right came with her role of Princess Leia in the original Star Wars trilogy in 1977.[1] The role seemed to mirror Carrie's own life, of a beautiful but very capable young woman who just needed the occasional help from friends and family as she navigated life.[1]

Carrie continued on after her role in the Star Wars trilogy to use her skills as an author, writing novels which explored the troubled life lived in the entertainment industry. Most notable was the semiautobiographical "Postcards From The Edge" which was later turned into a movie.[1] She would write seven books total.

Carrie was open about her diagnosis with bipolar disorder, even sharing her nicknames for her emotional extremes, Roy and Pam.[1] She fought depression and substances abuse in association with the disease, sharing her experiences in her creative works.[1] Carrie also served as an honorary board member for the International Bipolar Foundation, and, in 2014, received the Golden Heart Award for her work with The Midnight Mission.

Carrie was a supporter and advocate for several causes, including women's issues, animal rights, and LGBT causes. She was open about her experiences caring for friends who suffered from AIDS. She contributed financially to various AIDS and HIV organizations, including hosting a benefit for amfAR, The Foundation for AIDS Research.

In 2016, Harvard College gave Carrie its Annual Outstanding Lifetime Achievement Award in Cultural Humanism, noting that "her forthright activism and outspokenness about addiction, mental illness, and agnosticism have advanced public discourse on these issues with creativity and empathy."

Carrie died 27 December 2016 in Los Angeles, following a heart attack on a flight home from London.[1] Her mother passed away the day after, with both Carrie and Debbie sharing a funeral service.[3] She is buried at the Forest Lawn Memorial Park, Hollywood Hills, Los Angeles, California.[4][1]

After Carrie's passing, and after much discussion and the blessing of her daughter Billie, she starred posthumously in Star Wars Episode IX: The Rise of Skywalker (2019) by using archival footage shot during The Force Awakens.[5]

Is Carrie your relative? Please don't go away!

ask our community of genealogists a question.
Sponsored Search by Ancestry.com
DNA
No known carriers of Carrie's DNA have taken a DNA test. 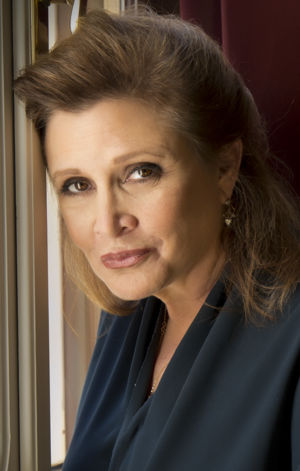 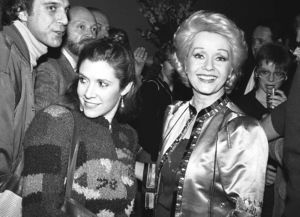 Leigh Anne (Johnson) Dear
7th cousin, 3x removed through 'my' southern Maxey line.  :-) I adored Carrie's book "Postcards from the Edge" it's her story filled with the particular kind of cold-war social ethos found during the 50's through the 1970's. Her story, filled with hysterical comic moments to lighten the mood, was written much like an early Barbara Kingsolver narrative which itself is reminiscent of an earlier Flannery O'Connor but without the religious overtones.
posted Dec 18, 2019 by Leigh Anne (Johnson) Dear