David Fiske was born in England in 1624 to David Fiske and Sarah (Smythe) Fiske.[1]

David came over from England with his parents in the year 1637 at the age of 13.[2] He settled in Watertown, but moved to Cambridge in about 1646 on the northerly side of Linnaean street, near the Botanic Garden, which estate he sold to Joseph Daniel 13 Dec. 1660. About which time he moved to Cambridge Farms (Lexington).[3] He was a "planter" and was admitted a freeman of the Colony May 25, 1647.[1]

In 1646 he married Lydia Cooper in Cambridge, sister of Deacon John Cooper and step-daughter of Deacon Gregory Stone., with whom he came over to the colonies.[1] He had 3 children with her before she died on 29 November 1654.

On September 6, 1655 he married Seaborn Wilson[4], daughter of Theophilus Wilson of Ipswich.[1] David Fiske was named executor of Theophilus' will.[1] Seaborn died at Woburn on 12 January 1721.[1]

David Fiske was a wheelwright by trade, and also held several public offices. He was chosen Selectman in 1688.[3] He was often a surveyor of lands and helped to lay out the new Cambridge Farms.[3]

David was the first subscriber for the erection of a meeting house at Cambridge Farms in 1692, and on organization of the new parish the next year. He was a member of the new Church which began in 1696.[3] He helped organize the parish as clerk and was chosen as chairman of the committee to purchase land for support of the ministry.[5]

He headed the subscription for a meeting house in 1692, and on the organization of the parish the year after, he was chosen clerk, and one of the selectment or assessors. He was also chosen chairman of a committee to purchase of the town of Camb. a lot of land for support of the ministry. These and other similar offices he frequently held under the Parish. He was also a member of the church organized in 1696, and his wife immediately after removed her relation from the church in Camb. to the church gathered in the precinct.

A handsome monument was erected in 1856 by Benj. Fiske, Esq., with this inscription:

In 1675 the work of settlement at Worcester was prosecuted with vigor, about the middle of April surveys were made of the lands by David Fiske, of Cambridge. Partial surveys were made in May, 1685 (at Worcester), a lot was laid out for Gookin of 100 acres on the east side of Pakachoag Hill and another lot of 80 acres on Raccoon Plain. There were present at this time David Fiske, the surveyor, and others. [History of Worcester.][3]

He not only served his fellow-citizens in a civil and religious, but also in a military capacity, as appears by the prefix Lieut., which is often in the records connected with his name. He was often employed by the colony as a surveyor. He resided on Hancock St." [5] 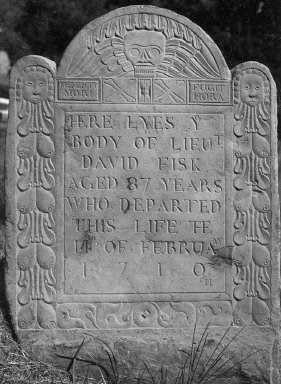 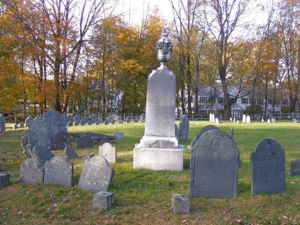 Anne B
His father was freeman in early 1637 (Mass Bay Col Rec 1: 374. Since this David was young at the time he no doubt came with his father. However, I don't think the statement about the Arabella is correct. It is noted for its sailing in 1630. Changing bio.
posted Jan 28, 2019 by Anne B

Cheryl (Aldrich) Skordahl
Can't really say that the following is evidence, Michael, but it says he was here by 1637 in 1st paragraph, left column.

Michael Stills
Evidence for David's arrival in America cites Findagrave. This "source" does not provide any evidence. Do we have an original source for his arrival?
posted Jan 27, 2019 by Michael Stills