Richard FitzAlan is in a trail badged by the Magna Carta Project to surety barons Robert de Vere and Saher de Quincy (see text below).

Lands: the Castle and Honour of Arundel, Sussex, and Oswestry, Shropshire[3]

Richard married first to Isabel le Despenser[6] on 9 February 1320/1 at the King's Chapel at Havering-atte-Bower, Essex.[1][3] Isabel, daughter of Hugh le Despenser, Knt., 2nd Lord Despenser and Eleanor, daughter of Gilbert de Clare[1][2] was born about 1313.[3] Her father settled manors in Wiltshire and Buckinghamshire on the couple immediately after their marriage.[3] The marriage cemented the alliance between Richard's father and favorites of Edward II. They had one son:

Richard and Isabel's marriage was annulled by papal mandate dated 4 December 1344[3] on the grounds of his minority and of his never willingly consenting to the match. Richard and Isabel claimed conception of their son was a result of being forced by violence to cohabit.[1] Their child/children were bastardized as a result of the annulment.[1][3] "In none of the documents bearing on the [annulment] case is there a mention of daughters", however two have been proposed and disproved: Phillipe and Isabel[1] (see Research Notes below).

Richard married second in Ditton, Buckinghamshire on 5 February 1344/5, in the presence of King Edward III, to Eleanor of Lancaster, widow of John de Beaumont, Knt., 2nd Lord Beaumont, and daughter of Henry of Lancaster, Knt., Earl of Lancaster and Leicester, and Maud Chaworth.[1][2][3][9] Richard had previously cohabitated with Eleanor,[1] before his annulment and while her first husband was still living.[2] They received papal dispensations dated 4 March 1344/5 and 6 July 1345 as they were related in the 4th degree of kindred.[3] They had three sons and two daughters:

Richard also had at least two children with an unknown mistress or mistresses:

When he succeeded to the earldom of Surrey, Richard gained vast wealth. He frequently aided Edward III in financial difficulties by giving hime large advances and, by 1370, Edward was more than twenty thousand pounds in his debt. At his death Arundel left behind over ninety thousand marks in ready money, nearly half of which was stored up in bags in the high tower of Arundel.[6]

"The Arundel Tomb in the North Aisle of Chichester Cathedral was brought from Lewes Priory after its dissolution in 1537. It is a tomb chest, with on top the recumbent figures of Richard Fitzalan, earl of Arundel and his second wife, Eleanor of Lancaster. On the side of the tomb are shields. Originally the whole tomb was probably painted, with the figures resplendent and the shields showing the coats of arms of the couple."[12] The memorial effigy of Eleanor and Richard Fitz Alan was the inspiration for Philip Larkin's "An Arundel Tomb"[13] written in 1964[14] (this blog has "An Arundel Tomb" and several images; see also Chichester Cathedral's page on the Arundel Tomb).

Formerly attached as children of Richard and his first wife, Isabel, from an early volume of The Complete Peerage, which was amended in 1998 and later (profiles were disconnected 6 December 2019):

These two children were proposed to be the children of Richard and his second wife, Eleanor, but are not recognized as such by Richardson and have been disproved:

No evidence of these daughters can be found:

See the Changes tab for edits to this profile. Thanks to everyone who contributed.

Richard FitzAlan is a descendant of Magna Carta surety barons Robert de Vere and Saher de Quincy. His profile is in trails badged by the Magna Carta project to the following Gateway Ancestors: 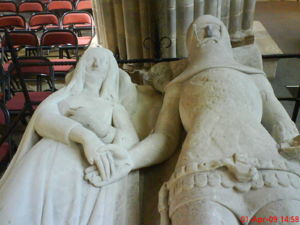 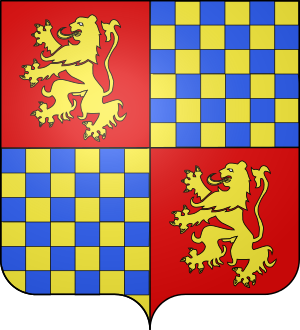 John Atkinson
Sorry I just happened to find this discussion, and it's probably none of my business, but while the images are being looked at Image 3 also has a comment that it is probably someone else.
posted Oct 24, 2019 by John Atkinson

Liz (Noland) Shifflett
I've removed the "not him" image & made the updated Coat of Arms the primary image to raise its visibility. Let me know if you'd rather one of the other images/which one be primary instead (the thumbnail image displayed at upper left of profile & in trees).

Robin/Tom - It was suggested that the COA image be set as the background for this profile. My computer's so old that profiles with a background image slow it significantly, so I tend away from setting background images but if y'all want the COA as bg, let me know & I'll set it for you.

Carol Baldwin PhD, RN
Hi Liz, I added the COA for Richard FitzAlan de Arundel on 23 Oct 19. There is another photo (plaster head shot) that says 'Not Him.' I believe this should be deleted. The effigy of Richard and his 2nd wife, Eleanor, is from the FitzAlan-29 Wikipedia site as is the corrected COA. Thank you, Carol
posted Oct 24, 2019 by Carol Baldwin PhD, RN

Robin Wood
I agree, pl can someone remove image 2 as its an exact replica of image 1
posted Jan 09, 2019 by Robin Wood

Carol Baldwin PhD, RN
Do there need to be two of the same images for Richard FitzAlan (Images 1 and 2)?

Also, I think the Image 6 is incorrect. The COA for this Richard FitzAlan is quartered with lion in upper left and lower right, and yellow and blue checkered filed in the upper right and lower left. Please let me know if you want me to delete and replace Image 6 with the correct COA. Thank you!

Richard is 19 degrees from Cecil B. DeMille, 25 degrees from Rosalie Neve and 6 degrees from Henry VIII of England on our single family tree. Login to find your connection.