Charles Fitzcharles, Earl of Plymouth, the illegitimate son of Charles II of England and Catherine Pegge, was probably born in Bruges, West Flanders, in 1657. His mother's liaison with the exiled king had come to an end by 1658, and he was brought up by her in the Spanish Netherlands with the support of his maternal grandfather, Thomas Pegge of Yeldersley.

He married under the name Charles Earle to Thomas Osborne, 1st Duke of Leeds third daughter, Lady Bridget Osborne, at the parish church at Wimbledon, Surrey, on 19 September 1678.[1]

Commissioned on 13 July 1680 as the colonel of a new regiment, the 4th of foot, he arrived in Tangier on 2 July 1680, having already left England prior to the commission. Conducting assaults to remove the Moors from positions outside the city walls, he drank from contaminated water and fell ill with dysentery. After being carried back to the city, his condition worsened and he died of the ‘Bloody flux’ on 17 October 1680.

Charles's body was conveyed back to England by his servants and interred on 18 January 1681 in Henry VII's chapel, Westminster Abbey, in the vault vacated of the bodies of the Cromwell family.

ask our community of genealogists a question.
Sponsored Search by Ancestry.com
DNA Connections
It may be possible to confirm family relationships with Charles by comparing test results with other carriers of his ancestors' Y-chromosome or mitochondrial DNA. Y-chromosome DNA test-takers in his direct paternal line on WikiTree: 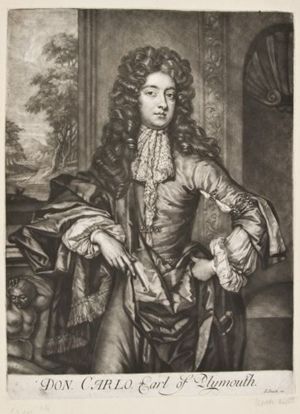