James Fitzgerald was a member of the aristocracy in British Isles.

He was a member of the Irish House of Commons for Athy from 1741 before succeeding his father as 20th Earl of Kildare in 1744. He was sworn of the Irish Privy Council in 1746 and in 1747, on the occasion of his marriage (see below), he was created Viscount Leinster, of Taplow in the County of Buckingham, in the Peerage of Great Britain, and took his seat at Westminster that same year.[1] From 1749 to 1755 he was one of the leaders of the Popular Party in Ireland,[citation needed] and served as the country's Master-General of the Ordnance between 1758 and 1766, becoming Colonel of the Royal Irish Artillery in 1760. He was promoted to Major-General in 1761 and to Lieutenant-General in 1770.

Leinster married the 15-year-old Lady Emily Lennox (6 October 1731 - London, 27 March 1814), daughter of Charles Lennox, 2nd Duke of Richmond and one of the famous Lennox Sisters, in London on 7 February 1747. She was descended from King Charles II and was therefore a distant fifth cousin of King George III (both of them were descended from King James VI and I).

Despite James' many infidelities, his marriage to Emily was a happy one. The couple had nineteen children:

James died at Leinster House, Dublin, in November 1773, aged 51, and was buried in the city's Christ Church Cathedral. He was succeeded by his second but eldest surviving son, William, Marquess of Kildare. The Duchess of Leinster caused a minor sensation by marrying her lover William Ogilvie in 1774, but continued to be known as The Dowager Duchess of Leinster. She had a further three children by William Ogilvie. She died in London in March 1814, aged 82. 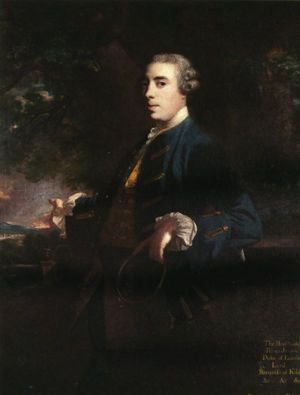