Henry FitzRoy, 1st Duke of Richmond and Somerset was the illegitimate son of King Henry VIII and Bessie Blount, born sometime in June 1519. [1]

He was given the name "Fitzroy" in public acknowledgement that he was the son of the King. In 1525, as a six year old, Henry FitzRoy was created Earl of Nottingham and Duke of Richmond and Somerset.

There were several other appointments; Lord High Admiral of England, Lord President of the Council of the North, and Warden of the Marches towards Scotland.

He married Lady Mary Howard in 1533 though the marriage was never consummated.

Sponsored Search by Ancestry.com
DNA Connections
It may be possible to confirm family relationships with Henry by comparing test results with other carriers of his ancestors' Y-chromosome or mitochondrial DNA. Y-chromosome DNA test-takers in his direct paternal line on WikiTree:

Images: 1
Duke of Richmond and Somerset 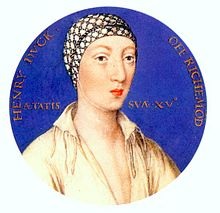 Henry is 22 degrees from Danielle Liard, 16 degrees from Jack London and 1 degrees from Henry VIII of England on our single family tree. Login to find your connection.