Daughter of [father unknown] and Barbara (Villiers) Palmer
Sister of Anne (Palmer) Lennard [half], Charles Fitzroy KG [half], Henry Fitzroy [half], Charlotte (Fitzroy) Lee [half] and George Fitzroy [half]
Mother of Charles Hamilton
Died 6 May 1737 at age 64 in Pontoise, France

Barbara was born on 16 July 1672 at Cleveland House in London. She was the sixth child of Barbara Palmer, 1st Duchess of Cleveland, who had been the principle mistress of Charles II of England for 12 years, while married to Roger Palmer, Earl of Castlemaine. [1]

Around the time of Barbara's birth, her mother was losing her position as the King's chief mistress to Louise de Kérouaille. Her mother claimed Barbara was the King's daughter. King Charles did not appear to have acknowledged the child, as she was not officially granted the surname of Fitzroy as her siblings had (see research notes). Barbara was suspected to have been the child of either John Churchill, or Philip Stanhope, Lord Chesterfield.

In March 1691, the eighteen-year-old Barbara gave birth to an illegitimate son of James Hamilton, Earl of Arran, who was named Charles Hamilton. The child was raised by Barbara Villiers, who was said to have disowned her daughter.[citation needed]

Roger Earl of Castlemaine died in 1705, [4] and Barbara's mother the Duchess of Cleveland died in 1709. [5] Neither mentioned Barbara or her son in their wills.

An autograph of the Prioress reported said:

This has been roughly translated as "My name in the world is Barbe Fitz Roy, in Religion it is Benedicta, daughter of the King of Great Britain, Charles II. I made profession at the Convent of the English Benedictines in Pontoise, the year 1691, the 2nd of April. It is my place of penance."

She died on 6 May 1737 and lies buried in the church of the Priory of St Nicholas at Pontoise. [6]

Oxford DNB says Charles II never acknowledged Barbara as his daughter, but did acknowledge the sons and two older daughters of Barbara Palmer as his children. It states Barbara was probably the daughter of John Churchill.[1]

"The Calendar of State Papers" during the reign of Charles II has references to Charles, George and Henry all being given the surname Fitzroy. In 1673, Anne and Charlotte were described as the King's "dear and natural daughters, the Ladies Anne and Charlotte Fitzroy, by... Barbara, Duchess of Cleveland" They were granted the right to bear Royal Arms in a lozenge with a baton sinister ermine, the distinction granted to their eldest brother Charles, Earl of Southampton. No such distinction was granted to Barbara. [7] 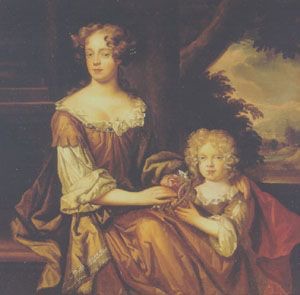 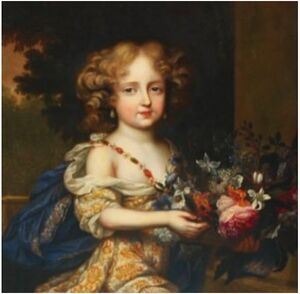 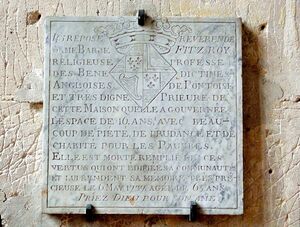 Megan Woodward
FitzRoy-237 and Fitzroy-8 appear to represent the same person because: Hi,

posted Oct 27, 2021 by Megan Woodward
CC Lee
Hi Megan: The profile you are asking to merge was created by you last month. It appears you have also done this with other WikiTree entries. I can certainly understand the desire to do this when you descend from a person, however that is not how WikiTree properly works. I would ask you to amend this WikiTree page rather than creating a new one and then asking to merge it with the original one. Please make your proposed edits to this page.
posted Oct 27, 2021 by CC Lee

I did explain in my previous email to you that I was unaware at the time of creating the profile that another existed,... nothing came up. Cheers, Megan

C. Mackinnon
From the evidence available it is not possible to assign a father for Barbara.
posted Jun 08, 2017 by C. Mackinnon