The History of the Crusades, by, Joseph Fr. Michaud, William Robson, and Hamilton W Mabie

"The men of the Vermandois marched with the subjects of Philip under the colours of their count Hugh, a young prince whose brilliant qualities had been much admired by the court."

"Robert, surnamed Courte-heuse, duke of Normandy, who led his vassals to the holy war, was the eldest son of William the Conqueror."

"Another Robert, count of Flanders, placed himself at the head of the Frisons and the Flemings. He was son of Robert, surnamed the Frison, who had usurped the principality of Flanders from his own nephews, and who, to expiate his victories, had performed, some time before the crusade, the pilgrimage to Jerusalem. The young Robert easily found soldiers for his enterprize in a country where everybody had borne arms during the civil wars, and where the people were animated by the tales of a great number of pilgrims returned from the Holy Land. He exhausted the treasures of his father, to embark in an expedition which procured him the reputation of a bold knight, together with the surname of "The Lance and Sword" of the Christians. Five hundred horsemen sent by Robert the Frison to the emperor Alexis had already preceded him to Constantinople."

"Stephen, count of Blois and Chartres, had also taken up the cross."

"These four chiefs were accompanied by a crowd of knights and nobles, among whom history names Robert of Paris, Evrard of Prusaiè, Achard de Montmerle, Isouard de Muson, Stephen, count d'Albermarle, Walter de St. Valery, Roger de Barneville, Fergant and Conan, two illustrious Bretons, Guis de Trusselle, Miles de Braiës, Raoul de Baugency, Rotrou, son of the count de Perche; Odo, bishop of Bayeux, uncle of the duke of Normandy; Raoul de Gader, Yve and Albéric, sons of Hugh de Grandménil. The greater part of the counts and barons took with them their wives and children, and all their war equipages. They crossed the Alps, and directed their march towards the cities of Italy, with the intention of embarking for Greece. They found in the neighbourhood of Lucca Pope Urban, who gave them his benediction, praised their zeal, and offered up prayers for the success of their enterprize. The count de Vermandois, after having received the standard of the Church from the hands of the sovereign pontiff, repaired to Rome, with the other princes, to visit the tombs of St. Peter and St. Paul."

"The passage of the French Crusaders, however, had awakened the zeal of the Italians. Bohemond, prince of Tarentum, was the first who resolved to associate himself with their fortunes, and to partake of the glory of the holy expedition."

The First Crusade; The Accounts of Eyewitnesses and Participants, by August Charles Krey

"When this message was heard, the Christians, cleansed by confession, and stoutly armed by partaking of the body and blood of Christ, went out from the gate ready for battle. The first to go forth was Hugh the Great, with his Franks; next the Count of the Normans and the Count of Flanders; after them, the venerable Bishop of Puy and the battle line of the Count of St. Gilles; after him, Tancred; and last of all, unconquered Bohemund. When, accordingly, the lines had been formed, with the Lance of the Lord and the Cross before them, they began battle with the greatest confidence. God helping, they turned in flight the Turkish princes, who were confused and utterly beaten, and killed countless numbers of them. Returning, therefore, with victory, we gave thanks to the Lord and celebrated the festival of the apostles with the greatest rejoicing. On that day the citadel was surrendered to us, the son of the King of Antioch having fled with Corbara. The King himself had been killed by peasants while fleeing in the mountains on the day that the city was surrendered.*"

Is Robert II your ancestor? Please don't go away!

ask our community of genealogists a question.
Sponsored Search by Ancestry.com
DNA
No known carriers of Robert II's DNA have taken a DNA test.

Images: 1
The First Four Leaders of the 1st Crusade 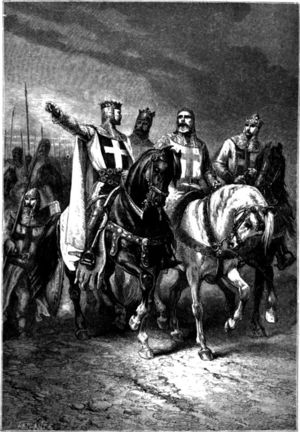 Michael Thomas
Flanders-567 and Flandre-30 appear to represent the same person because: Same person - parents will need to be merged, as well
posted Nov 02, 2014 by Michael Thomas

Robert II is 30 degrees from Mary McCauley, 31 degrees from B. W. J. Molier and 13 degrees from Henry VIII of England on our single family tree. Login to find your connection.