BAUDOUIN II The Bald, Count/Marquis of Flanders, 879-918, Count of Artois, Count of Boulogne, 898? -918, etc, 2nd and eldest surviving son and heir, born about 863-865. He married in 884 AELFTHRYTH (or ELSTRUDE) OF WESSEX, daughter of Alfred the Great, King of Wessex, by Ealswith, daughter of Aethelred Mucil, earldorman of the Gaini. She was born about 870. They had two sons, Arnulf (I) [Count/Marquis of Flanders] and Adalolf (or Adolf), and two daughters, Ealhswid and Ermetrude. BAUDOUIN II, Count/Marquis of Flanders, died in 918, probably 10 Sept. His widow, AElfthryth (or Elstrude), died 7 June 929. He and his wife were buried in the abbey of Saint-Pierre, Gand.[2]

Is Baudouin II your ancestor? Please don't go away!

ask our community of genealogists a question.
Sponsored Search by Ancestry.com
DNA
No known carriers of Baudouin II's DNA have taken a DNA test. 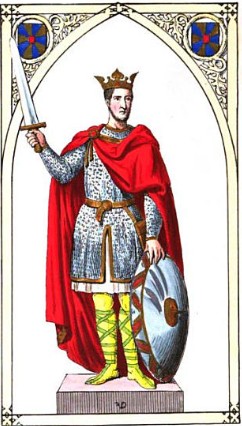 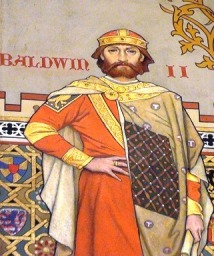 John Atkinson
Bauldwin-2 and Flandre-5 appear to represent the same person because: They are intended to be the same person, Baudouin is Alfred's son-in-law not his son. Flandre is the correct Last Name at Birth, Baudouin and Bauldwin are both variations of his first name.
posted Dec 18, 2015 by John Atkinson

Baudouin II is 34 degrees from Mary McCauley, 36 degrees from B. W. J. Molier and 19 degrees from Henry VIII of England on our single family tree. Login to find your connection.