Hughie (Florence) Call, born in Trent, Taylor County, Texas on May 20, 1890, to John Hicks Florence, a physician, and Kathleen Best Florence. Her father's work with the state occasioned her frequent moves in childhood to many small coastal and border towns and to Galveston, Texas, Houston, Texas and Dallas, Texas.

She received her education from tutors and in private schools, including Trinity University of San Antonio. She was a feature writer for a number of Texas newspapers under what was known as the Bagley Syndicate before marrying her first husband, Andrew Dickinson on May 5, 1909. She was widowed just ten years later with one son, Andrew Dickinson, Jr.

While visiting California in 1920, Hughie Florence Dickinson met Thomas J. Call, a veteran Montana woolgrower and former Montana state representative. He was also a widower with a young son, Leigh Call. After they were married on June 4, 1920, Hughie Florence Call moved from the relative urbanity of Texas to the isolated sheep ranch in the Rocky Mountains of Montana where she accumulated a lifetime of material for her books and stories.

Hughie (Florence) Dickinson / Call began her writing career in earnest in 1936, when the first of her factual articles, "Eavesdroppers in Eden" and "Sheep Bought It" were published. She then turned to fiction with "We, The Living," after which she ventured into short stories and later novels for children and adults. Mrs. Call wrote her first novel, "The Golden Fleece" in 1942, followed by four others: "Rising Arrow" (1950), "Peter's Moose" (1955), "The Little Kingdom" (1961), and "The Shorn Lamb" (1969).

"The Little Kingdom" is about Call's daughter, Florence Louise "Wezie," who died at age 17 of a sudden illness, and is dedicated to Tom, who died in1946. It received widespread recognition, having been translated into Braille and published internationally. It was also honored by The National Federation of Press Women as the best non-fiction juvenile book of 1965. Her short stories were published in Reader's Digest, Redbook, The Saturday Evening Post, amont others.

In addition to writing, she was a frequent guest Lecturer at various schools and taught creative writing both privately and at Drury University in Springfield, Missouri. A member of Theta Sigma Chi, The Texas Institute of Letters, and Who's Who of American Letters in 1967. She died on September 3, 1969.[2]

Her books are listed on Amazon.com

Is Hughie your ancestor? Please don't go away!

ask our community of genealogists a question.
Sponsored Search by Ancestry.com
DNA
No known carriers of Hughie's DNA have taken a DNA test. 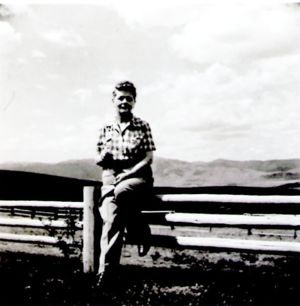 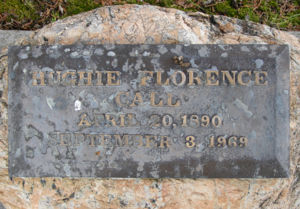 Category: Association for Women in Communications

(It is the name of the organization today.) Thanks, Vic

Vic Watt
I couldn't find anything about Theta Sigma Chi to set up the category, so I asked the University of Oregon Library, the repository for her collection. I received this response back:

"According to what I see in Literature Resource Center, a database of information on authors and literature, Call was a member of Theta Sigma Phi, not Theta Sigma Chi. I will have this corrected on our finding aid.

I didn't want to make the correction without your OK. The organization is now called the Association for Women in Communication, but it has had several names. See: Wikipedia If you will make the correction in the Bio, I will find out what the category should be and I will let you know. Vic