Hannah was a minister in the Quaker Meeting House at Baltimore, Maryland. From the record: 'likewise, the decease of our ancient friend, Hannah Scott, a Minister, who departed this life 4 of the 12th month 1785 in the 77th year of her age, which account is directed to be laid before next quarterly meeting. And the following friends are appointed to Inspect into the memorial and to report their sense of the same to the next meeting..'

Hannah was born about 1713. She married Jacob Scott. "Jacob3 Scott (Samuel2, Thomas1 Scott ) was born in 1714[1] (or 1709/10)[2] in Bensalem, Bucks County, Pennsylvania. He was a member of the Abington MM, Montgomery County, Pennsylvania. On 04 April 1734 at the Chesterfield Monthly Meeting near Crosswicks, New Jersey he declared his intention to marry. His father was present and gave his consent. Unfortunately, his father was not named in the proceeding. He married Hannah Forsyth on 4 April 1734 or 25 Dec 1734, in Crosswicks, Burlington County, New Jersey. They lived in Abington, Pennsylvania, which is now Montomery Co. He appeared in the Quaker ministry in 1751. He bought land from his parents in 1756 [DB 10 p 381; Doylestown, Pennsylvania]. He took some short religious journeys. They moved to Baltimore County, Maryland where Jacob died on 11 December 1766. Hannah Forsyth, the daughter of Matthew Forsyth and Rebecca Odling, was born about 1708. She died 4 December 1785. At the time of her death Hannah was a Quaker minister.

Jacob's will was dated 16 November 1766 and probated 23 March 1767, and names their children. The abstract reads as follows: Imprimis
wife: Hannah Scott to have land called "Pleasant Prospect" during her life and then to be my son's Joseph Scott - he paying each of my three daughters: Rebecca Hayward, Sarah, and Hannah Scott two pounds, and five pounds to my son, Jacob Scott. item: I give unto my daughter, Mary Scott, five pounds Carry that tract of land sold to Francis Daws to her and her heirs and the rest of my estate I give to my wife, Hannah.
I have set my seal 16 Nov 1766 - signed by Jacob Scott
Witnesses: John Scholfield, William Hayward, Robert Forman 23 March 1767 Came William Hayward, Robert Forman, two of the subscribing witnesses to the written will and being people called Quakers made their solemn affirmation that they and each of them saw the testator, Jacob Scott sign seal and deliver the same for his last will and testament that at the time of his doing so he was to the best of their apprehension of sound and disposing mind & memory that the subscribed signed their names as witnesses in presents (sic) of said testator as also they affirm they saw the other witness, John Scholfield sign his name as an Evidence thereto in the presence of the said testator and at his request. -- Affirmed before Wm. Young, _________, Balto. County [3] She passed away about 1785. [4]

ask our community of genealogists a question.
Sponsored Search by Ancestry.com
DNA Connections
It may be possible to confirm family relationships with Hannah by comparing test results with other carriers of her mitochondrial DNA. However, there are no known mtDNA test-takers in her direct maternal line. It is likely that these autosomal DNA test-takers will share some percentage of DNA with Hannah: 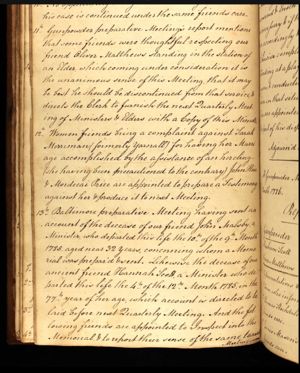