Adrian Fortescue was a member of aristocracy in the British Isles.

Adrian was born in 1476[1]. Knight of St. John and second son of Sir John Fontescue and Elizabeth (Alice) Boleyn, Great Aunt of Queen Anne Boleyn. He served in the 1513 campaign against the French which ended in the battle of the Spurs. He attended Queen Catherine at the Field of the Cloth of Gold in 1520. Served in the short and uneventful French War of 1522 and was knighted in 1528. Due to his connection to Anne Boleyn he received considerable favour in King Henry VIII's court. He is listed in papers of those who received grants of land from Wolsey's possessions after the cardinals fall in July 1530. He was present at all the festivities of the King's second marriage and received exceptional honour of being informed by special messenger of the birth of Princess Elizabeth. In February 1539 he was arrested and sent to the Tower. In May 1539, he was included in the act of attainer which condemned the Marchioness of Exeter, the Countess of Salisbury, Cardinal Pole, Sir Thomas Pole, Sir Thomas Dingley and others. This story remains a mystery, no historian has been able to find a motive or the reason it was hurried through both houses. Adrian has long been regarded by the order of St. John as a martyr.

He was twice married: first to Anne, daughter of Sir William Stonor, who died in 1518; and secondly to Anne, daughter of Sir William Rede, who survived her husband, and afterwards married Sir Thomas Parry, comptroller of Queen Elizabeth's household. By his first wife Fortescue had two daughters, Margaret, married to Thomas, first lord Wentworth, and Frances, married to Thomas, tenth earl of Kildare; by his second wife he had three sons, Sir John, chancellor of the exchequer [q. v.], Thomas, and Sir Anthony [q. v.], and two daughters, Elizabeth, married to Sir Thomas Bromley [q. v.], lord chancellor of England, and Mary.

ask our community of genealogists a question.
Sponsored Search by Ancestry.com
DNA
No known carriers of Adrian's DNA have taken a DNA test. 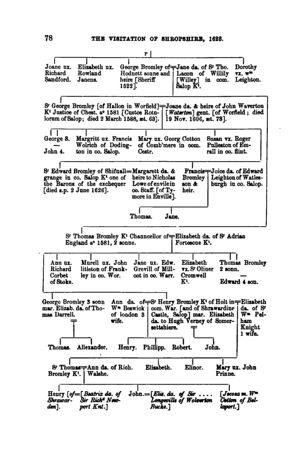 Sonja Ratliff
Hello, according to: http://www.tudorplace.com.ar/Bios/AdrianFortescueSalden%28Sir%29.htm Adrian was born 1476 in Punsborne, Hertfordshire, England. Please check it out.
posted May 29, 2015 by Sonja Ratliff
James Canning
Fortescue-31 and Fortescue-43 appear to represent the same person because: Both are Sir Adrian Fortescue, son of Sir John Fortescue of Salden by his wife Elizabeth Boleyn
posted Dec 30, 2014 by James Canning

Categories: Field of the Cloth of Gold | People Executed by the Tudors | Fortescue, Visitations of Sussex, 1530 and 1633-4