1. Fourier's claim to greatness all rests on one particular technique: his use of trigonometric series (which is now called the Fourier series) in the solution of differential equations. Since "Fourier" analysis is in enormously common use amongst applied mathematicians, he accompanies the top quality company of the eponyms of "Boolean" algebra,"Cartesian" coordinates, and "Gaussian" curve.

2. Published his revolutionary treatise on the Theory of Heat. Fourier's Heat Equation was built on Newton's Law of Cooling; and the Fourier series solution itself already had been brought to attention by Euler and Lagrange.

3. The notion of dimensional analysis. This work enabled him to express the conduction of heat in two-dimensional objects (i.e. very thin sheets of material) in terms of the differential equation in which "u" is the temperature at any time t at a point (x, y) of the plane and "k" is a constant of proportionality called the diffusivity of the material.

1. Under Napoleon he was a bright and vital teacher and historian; he accompanied the French Emperor to Egypt; and also did exceptional service as district governor of Grenoble.

2. After his return to France, Fourier was charged with the publication of the vast mass of Egyptian materials. This became the Description de l’Égypte, to which he also wrote a lengthy historical preamble on the ancient civilization of Egypt.

3. We have some letters he wrote also: Yesterday was my 21st birthday, at that age Newton and Pascal had already acquired many claims to immortality.

As the natural ideas of equality developed it was possible to conceive the sublime hope of establishing among us a free government exempt from kings and priests, and to free from this double yoke the long-usurped soil of Europe. I readily became enamoured of this cause, in my opinion the greatest and most beautiful which any nation has ever undertaken. [2]

Joseph Fourier was the son of a tailor in Auxerre. He first attended a local military school run by Benedictine monks. His success in mathematics during his early years later led him to become a mathematics teacher at the same school. Later the ideals of the French Revolution brought him into politics. When the École Normale was founded in 1794 in Paris, he was one of its first students. In 1795 he became a teacher there also. In the same year, when the École Polytechnique was opened, he joined its staff and became a colleague of Gaspard Monge and other mathematicians.

In 1798, along with Monge and others, Fourier went with Napoleon on his expedition to Egypt. Until 1801 he was occupied in extensive research on Egyptian antiquities, gave advice on engineering and diplomatic actions, and served for three years as the secretary of the Institut d’Égypte, which Napoleon established in Cairo in 1798.

After his return to France, Fourier was charged with the publication of the immense mass of Egyptian materials. This became the Description de l’Égypte, to which he also wrote a long historical prologue on the ancient civilization of Egypt. He was also appointed prefect (administrator for the national government and département) of the Isère département, a position he held from 1802 to 1814, with his head office at Grenoble. He showed grand administrative skill, as in directing the drainage of swamps, while continuing his Egyptological and mathematical work. In 1809 Napoleon made him a baron. Following Napoleon’s fall from power in 1815, Fourier was made director of the Statistical Bureau of the Seine, allowing him a time of quiet academic life in Paris. In 1817 he was elected to the Académie des Sciences, of which, in 1822, he became perpetual secretary. Because of his work in Egyptology he was elected in 1826 to the Académie Française and the Académie de Médecine.

Fourier began his work on the Théorie analytique de la chaleur in Grenoble in 1807 and finished it in Paris in 1822. His work allowed him to express the transfer of heat in two-dimensional objects (i.e., very thin sheets of material) in terms of the differential equation in which u is the temperature at any time t at a point (x, y) of the plane and k is a constant of proportionality called the diffusivity of the material. The problem is to find the temperature, for example, in a conducting plate, if at time t = 0, the temperature is given at the boundary and at the points of the plane. For the solution of such problems in one dimension, Fourier introduced series with sines and cosines as terms: y=1/2a0 +(a1 cos x+b1 sin x) +(a2 cos 2x+b2 sin 2x)+ … Such Fourier series, already sometimes used by Leonhard Euler and other 18th-century mathematicians, but somewhat distrusted, was acknowledged through Fourier their important place in modern mathematics. He also lengthened this concept into the so-called Fourier integral. Doubts of the soundness of the Fourier series, which led later mathematicians to a fundamental renewal of the concept of real function, were resolved by P.G.L. Dirichlet, Bernhard Riemann, Henri Lebesgue, and others. Fourier worked on the theory for almost his entire life. He was also interested in the determination of roots of algebraic equations (the so-called theorem of Fourier).

(Internet translation: Without marriage or posterity himself, the heirs named in his Legion d'honneur are Etienne-Joseph Fourier (consanguineous brother) and his daughter Marie-Jeanne, wife of Louis-Claude Pierre Blanchin, an employee of the Ministry of Finance Can we conclude that none of the other siblings has any descendants?) 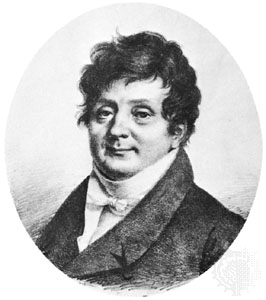