Zack Fowler was the son of Jess Fowler and Lucinda Bailey and was probably the brother of Jesse Frost's wife, Mellie. Lucinda Bailey Fowler brought her children from Georgia to Texas about 1855 and settled in Bastrop county Texas. Soon after Zack and Ellen married they moved to Bastrop county with the Frost brothers. Deeds of land transfer in Bastrop county from Lucinda Fowler to Zack and Ellen and to Jesse and Mellie indicate that both Zach and Mellie were children of Lucinda, although the deeds do not say that. Lucinda Fowler lived with Zack and Ellen at times, and the stories handed down in the family indicate that she was a rugged pioneer woman. When things didn't go to suit her, such as the kids making too much noise, she was known to pitch a tent in the woods and stay by herself for a while.

Zack Fowler had a bit of gypsy in his soul and he liked to move around. Among other things, he was a photographer in a time when there were few photographic studios or individually owned cameras. So he moved about the country taking pictures of people; and when he made all he could in one location, he would move his family again.

As the Fowlers were wandering through south central Texas a gentleman from Waelder in Gonzales county named Jack Robinson "stole" their 15-year-old daughter, Ola, their first child. They were so angry with Jack for marrying Ola at such a young age that they never forgave the young couple. They seemed to have forgotten that Ellen was even younger when Zack "stole" her. They moved away and Ola never saw her parents again.

Later the wandering of the Fowlers took them to Willis, Texas, in Montgomery county, near Huntsville. When they decided to move again, their oldest son, Jack refused to go. He said he liked it there and was tired of moving. Later he married a Huntsville girl and lived in that area the rest of his life.

Zack and Ellen had moved to Russell, Arkansas, where Ellen became sick and died in 1904.

Is Zachary your ancestor? Please don't go away!

ask our community of genealogists a question.
Sponsored Search by Ancestry.com
DNA Connections
It may be possible to confirm family relationships with Zachary by comparing test results with other carriers of his Y-chromosome or his mother's mitochondrial DNA. However, there are no known yDNA or mtDNA test-takers in his direct paternal or maternal line. It is likely that these autosomal DNA test-takers will share some percentage of DNA with Zachary: 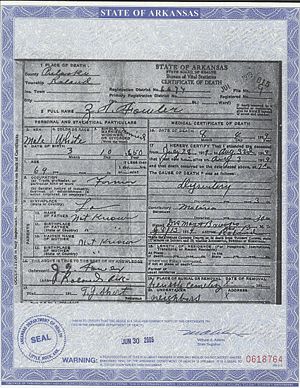 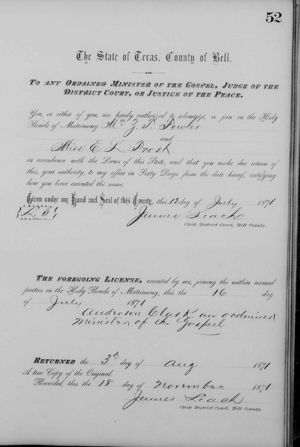