George Fox was born at Drayton-in-the-Clay (now Fenny Drayton), Leicestershire in July 1624.[1][2][3] He was the son of Christopher Fox and Mary Lago.[1] He had three younger siblings.[2] His parents were reasonably well-off: George Fox had a large enough inheritance when his father died not to have to worry much about money.[2]

He returned home the following year, and there followed a set of debates and consultations with religious ministers. He appears to have suffered from depression and spiritual dissatisfaction during this period, and none of the priests gave him what he regarded as satisfactory answers. He became increasingly critical of recognised Christian ministers.[2]

George Fox had a series of mystical experiences. In one, which occurred in 1647, he heard a voice saying, "There is one, even Jesus Christ, that can speak to thy Condition".[6] He came to believe that even the Bible was less authoritative than inner guidance; to reject doctrines like the Trinity as having no scriptural basis; and to oppose the taking of oaths and payment of tithes. Soon he started to refuse to take off his hat as a sign of respect for social superiors, and to proclaim that it was not education that qualified people to minister and speak in religious gatherings, but divine inspiration.[2]

George Fox began to preach his message in the Midlands of England, but his beliefs inevitably brought him into conflict with the authorities. He suffered his first periods of imprisonment in Nottingham and Derby.[2][7]

In 1650, after his imprisonment in Derby, a Justice nicknamed him and his followers Quakers, because of their tendency to tremble in their gatherings.[2]

In 1651 George Fox refused an offer of freedom from gaol in Derby if he fought as a captain for the parliamentary side in the period that led up to the 1651 Battle of Worcester.[8][2]

Finally freed in late 1651, George Fox moved the centre of his activity to the North of England. In Lancashire and Westmorland he attracted an increasing number of listeners and followers. From these came many of the group of early Quaker missionaries known as the 'Valiant Sixty'.[2]

In the summer of 1652 he came to Swarthmoor Hall, Lancashire, the home of Thomas and Margaret Fell. Margaret soon became a staunch adherent. Her husband, Thomas, did not join the movement. He was a judge, and this gave some protection to the incipient movement.[2]

In 1653 George Fox was arrested on his way to London, and escorted to the capital. This did not stop him proselytising as he went. In London, he spent most of a morning with Oliver Cromwell on 9 March 1654, and this led to his release.[2][9]

By 1655 James Nayler, a charismatic Quaker figure and a prolific writer, was very active in London and a set of largely female supporters grouped round him. In 1656 they started to disrupt Quaker gatherings to promote James Nayler as head of the Quaker movement.[2] Nayler himself refused to speak against other Quaker leaders.[10]

At the end of 1655 George Fox went to the south-west of England. He was arrested in Cornwall and held in Launceston prison. In London disputes between the supporters of Nayler and those of other Quaker leaders became more intense. James Nayler attempted to travel to visit Fox and heal the breach, but was arrested and imprisoned at Exeter, Devon. On his release in September 1656, George Fox went to see Nayler in Exeter. The meeting did not go well.[2][10] Fox offered his hand for Nayler to kiss as an acknowledgement of Fox's superiority in the Quaker movement, and, when Nayler refused, Fox sarcastically offered him his boot to kiss instead.[2][10][11]

Nayler was released in October 1656 and entered Bristol in a procession which was interpreted as a blasphemous re-enactment of Christ's entry into Jerusalem.[2][10] During Nayler's subsequent trial, harsh treatment and imprisonment, Fox had virtually no contact with him. Their quarrel was formally patched up in 1659 or early 1660 after Nayler was freed.[2][10][12]

George Fox himself, in his Journal, passes very quickly over the difficulties between him and Nayler in two paragraphs, confining himself to statements of the most general kind,[13] but it was a major episode in the first years of the Quaker movement.

The Nayler controversy, and continuing threats of splits and divisions, led George Fox to give the Quaker movement more structure over the years that followed [14], leading to the institution of the Monthly and Quarterly Meetings.[2][15] He also introduced Quaker marriage certificates, partly to counter accusations of immorality among Friends.[2]

In 1659, after Oliver Cromwell's death, George Fox wrote a pamphlet, Fifty-Nine Particulars for the Regulating [of] Things, in which he asked the Rump Parliament, among other things, to engage in major redistribution of wealth.[2]

Following the Restoration, Quakers, along with other groups which did not adhere to the Church of England, were viewed with considerable suspicion and subject to periods of fierce persecution. Some suspected them of revolutionary tendencies. George Fox and Richard Hubberthorne issued another pamphlet to try and assure the authorities of Quakers' peaceful intentions - A Declaration from the Harmles & Innocent People of God, called Quakers. This included a statement of the pacifism with which Quakers have been associated ever since.[2][16][17]

This pamphlet did nothing to appease the authorities, although Charles II was inclined towards religious toleration. In 1662 an Act of Parliament specifically against the Quakers was passed[2][18], and further persecution followed.[2] George Fox himself was imprisoned again three times, twice between 1664 and 1666, and again from 1673 to 1675. The conditions in which he was held were often harsh, and his health suffered.[2]

Over this period George Fox wrote many Epistles, some addressed to people in faraway countries.[2] He also engaged, during his times of freedom, in missionary activity, including a visit to Ireland in 1669[19] and, from 1671 to 1673, going with a group of Quakers to the Caribbean and North America.[2][20]

George Fox's last years were spent largely in London, and in Surrey and Essex where two of his stepdaughters lived, though he did visit Denmark and the Netherlands.[2]

When William Penn was granted Pennsylvania in 1681, he allotted an area of land to George Fox.[2]

George Fox lived to see Quakers granted religious freedom following the accession of James II and then of William III.[2]

Images: 2
George Fox, founder of the Quakers. John Prickett was an early follower. 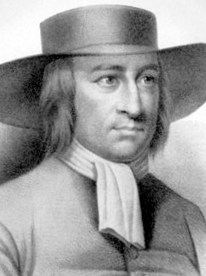 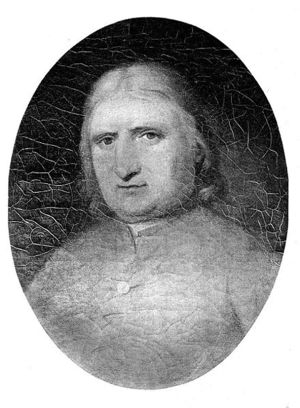 Iain Cooke
It is the County of Leicestershire and not Leicestershire County.
posted Apr 14, 2016 by Iain Cooke
Joseph St. Denis
"George Fox, chief founder of the people who came to be called Quakers was born in Leicestershire in 1624, the son of Christopher Fox, a weaver, who had served as a warden in the Fenny Draytan village church, a parish which had been led by pro-Puritan vicars for two generations". First Draft History Quakers in Maryland and Virginia January, 1977
posted Mar 24, 2015 by Joseph St. Denis