The following was adapted from the website of descendant Andrew Lancaster.

Jane’s father Isaiah Francis, was an agricultural labourer in the reclaimed lowland or “Fenland” area around the river Ouse between the older and higher towns of Littleport, Cambridgeshire and Downham Market, Norfolk.

Possibly, Ann had been Anne Clark who married William Kent in Wimbotsham, just on the other (northern) side of Downham Market, on 12th January 1835. And possibly William Kent was the 28 year old Journeyman Sweep living with the family of John Sainty, Master Sweep, in Downham Market in 1841. (Perhaps Ann and William were separated partly by economic need.) Intriguingly though, there is a William Kent appearing very close to Isaiah's family in 1841, an agricultural labourer, but only 15 and still living with his parents.

In the 1851 census, Jane was living in nearby Northdelph, in the parish of Upwell with her half-sister from Isaiah’s first marriage, Elizabeth Shingles. In 1861 she seems to have moved north and out of her county to Whaplode (called Jane Frances, and said to be born in Nordle, Norfolk which must refer to Northdelph/Nordelph).

Jane’s father Isaiah was living with the Shingles family in 1861 and seems to have died as a resident of the Wisbech Union Poor Workhouse, 12 September 1867, at the age of 75.

31 Jul 1864. George and Jane left England for Australia on the “Queen of the South”.

Mr. Ed. Higgens (for Hill, Clarke, and Co.) subsequently submitted Mr. Geo. Glover's highly-improved farm of 79 acres, situated on the Hunter, at Aberdeen. The bidding started at £10 per acre, and gradually mounted to £15, at which price it was knocked down to Mr. George Rossington, of Moonan Brook.

The Maitland Daily Mercury , Mon 17 Aug 1903 Page 4 SINGLETON QUARTER SESSIONS. George was a witness, and described then as a dairy man of Aberdeen.

The death occurred, on Friday last of a very old and highly-esteemed resident of the Upper Hunter in the person of Mrs Rossingon, relict of the late Mr. Geo Rossington, a one-time identity on the Belltrees Estate. Deceased, who attained a ripe age, leaves behind a grown-up family.

Obituary.— The late Mrs. Rossington, relict of the late Mr. Geo. Rossington, whose death on Saturday last was briefly referred to in last issue, had lived in the Upper Hunter, on Belltrees, for about 40 years. The good old lady— one of the old school— had been in failing health for some time, and passed away at the residence of her daughter, Mrs. Geo. Garland, on the day stated, at the age of 73. The deceased was a native of Denver, England, and, with her late husband, came to Australia in 1864; the year she was also married prior to coming to this country. The couple first went to Queensland, from there to Sydney, and then to Belltrees, on which estate they've mained, the late Mr. Rossington predeceasing his partner in life about three years. The surviving family are : Mrs. Blenman, Ellerston ; Mrs. F. W. Cox, Tingha ; Mr. G. F. Rossington. Deepwater ; Mr: Francis Rossington, Tingha; Mr. Theo. Rossington, Raymond Terrace; Mr. Isaac Rossington, Glenrock ; and Mrs. Geo. Garland, Belltrees. The remains were interred in the Church of England Cemetery, Gundy, on Sunday afternoon ; the burial service being conducted by the Rev. E. H Burgmann

IN THE SUPREME COURT OF NEW SOUTH WALES. Probate Jurisdiction.— In the Estate of JANE ROSSINGTON, late of Belltrees, near Scone, in the State of New South Wales, widow, deceased intestate. Application will be made after fourteen days from the publication hereof that Administration of the Estate of the abovenamed deceased may be granted to GEORGE FREDERICK ROSSINGTON, of Deepwater, in the said State, the son of the said deceased, and all accounts and all notices are requested to be sent to the undermentioned address. H. R. CROSSMAN, Solicitor for the Administrator. By his Agent: M. A. H. Fitzhardinge, 14 Moore Street, Sydney. 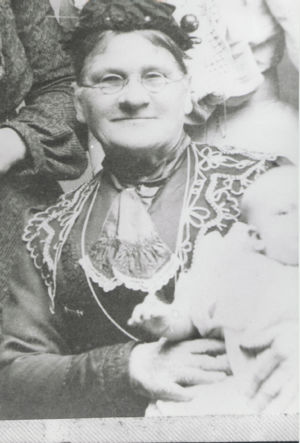 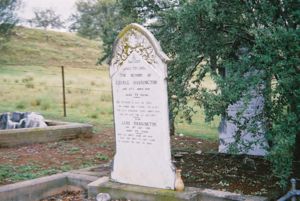