Died in the Battle of Chickamauga. He was the flag bearer for the 4th Texas Brigade, Pickett's Army. He came to Texas in 1848.

". . . When the Civil War broke out, Edward enlisted in the 4th Texas Brigade, Pickett's Army, as the color bearer. '. . . stalwart Ed Francis enrolled as Color Sergeant in Co A __' Hell's Roaring' Fourth Infantry Regiment of Hood's Texas Brigade. . . . ."Almost exactly a year later, 9/20/1863, Sergeant Ed Francis was slain in the Battle of Chickamauga. . . . "Here too, fell the gallant Lieutenants Bookman and Killingsworth; also Ed Francis, our color sergeant and many brave and gallant men."

"In a letter to George Francis from his son Wesley Clark Francis, dated 1/7/18/1864. . . 'You wanted to know about Edward's death. The morning the fight began we lay in line of battle listening to the deafening roar of battle. I felt like I wanted to talk to him; but, I did not and I shall ever regret that I did not. I believe I felt more anxiety here than at any other previous battle. Late in the evening the fatal command was given to forward. The last I saw of him he was bearing on the banner he had borne through every battle without falter. But soon I had to turn back. I never saw him more. His knapsack and all of his things was brought to me. The ball that killed him went through his breast and lodged in his knapsack. It is beginning to rain and we have no shelter, so I must close.'"

"On the battlefield of Chickamauga, The flag of the Fourth was held on high By the heroic hand of Gallant Francis, But his time had come to die.

His fate was almost surely spoken By the numerous wounds received, But his great courage couldn't be broken, 'Till from duty he was relieved.

His name should be on an honor roll ... Or on the face of the monument. For like all true men he had a soul Which for duty was doubly bent.

His body went down, his soul on high, As others, who followed his wake; While we were making the Federals fly For old General Longstreet's sake.

"The brave flag bearer of the Fourth, Lieutenant Ed Francis, Bore the flag that day for the last time."

Edward was born in 1837. He was the son of George Francis and Margaret Rector. He passed away in 1863.

ask our community of genealogists a question.
Sponsored Search by Ancestry.com
DNA Connections
It may be possible to confirm family relationships with Edward by comparing test results with other carriers of his ancestors' Y-chromosome or mitochondrial DNA. However, there are no known yDNA or mtDNA test-takers in his direct paternal or maternal line. It is likely that these autosomal DNA test-takers will share DNA with Edward: 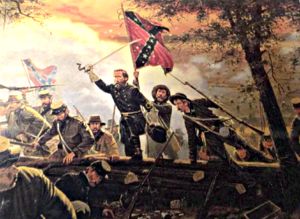 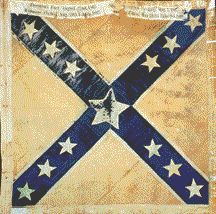 KEITH MCDONALD IS CORRECT. THIS SHOULD SAY 4TH TEXAS REGIMENT NOT BRIGADE.

not sure if quoted or was put together from multiple sources...

He would have been flag bearer for the 4th Regiment, not the 4th Texas Brigade, which did not exist

same goes for enlistment, which was in the 4th Texas Infantry Regiment, which was assigned to the Texas Brigade. There was no Pickett's Army, he was in charge of a Division, this probably come from being part of Pickett's charge with the texas Brigade falling under Hood's Division