In June 1765, Peter (Pedro) Francisco was found abandoned at a wharf in present-day Hopewell, Virginia ( then City Point). He was then about five years of age, and was believed to have been Portuguese, possibly from the Azores, and possibly kidnapped from his homeland and taken to America. Raised as an indentured servant by Judge Anthony Winston, Peter was trained as a blacksmith.

In 1775, he heard Judge Winston's nephew, Patrick Henry, give his famous speech, “Give Me Liberty or Give Me Death”, and became a supporter of the colonies breaking away from England. By 1776, Peter had joined the 10th Virginia Militia as a private. A five-foot sword was given him by Gen. George Washington, after Francisco's complaint that ordinary swords were too light.

At the age of 15 he was permitted to enlist, in 1776, as a private in the 10th Virginia Regiment. He re-enlisted two more times and was injured at least four times, once being left for dead. His feats were legendary. He reportedly picked up a one thousand pound cannon and hauled it on his back off the battlefield in New Jersey. Another story tells how he singelhandedly escaped from nine British soldiers that were holding him prisoner and escaped with their horses. His strength, size and bravery led to him being called "Hercules of the Revolution" and "The Giant of Virginia." After the war he became a wealthy store owner and was named the Sergeant-of-Arms for the Virginia House of Delegates. He was a national hero in the 1800s with children's books written about him and several states setting aside March 15th as "Peter Francisco Day." Several monuments and parks are named in his honor and in 1975 the U.S. Postal Service issued a commemorative stamp to celebrate his service to his country. An original eighteenth century engraving of this soldier is on display at Independence Hall in Philadelphia, Pennsylvania.

He was at the Battle of Stony Point, where he was wounded again, with a British bayonet (that soldier he then killed, who had been under Lt. Col Basastre Tarleton). Further wounds were received at the Battle of Camden, and then, with Colonel Watkins, at the Guilford Courthouse Battle, where he was bayoneted again in the leg. In the various battles he killed 11 men.

After the Guilford Courthouse battle, he defeated Tarleton’s Raiders in what was called “Francisco’s Fight” and made off with most of their horses. Peter was at Yorktown to see the British surrender. (Then) Colonel George Washington was so impressed that he offered him a commission, but Francisco declined (due to his lack of education), and stated that, ‘Without him, we would have lost two crucial battles, perhaps the war, and with it our freedom," and "He was truly a one-man army."[1]

At war’s end, in 1783, Peter went home to Buckingham, Virginia. He had inherited a farmhouse and land, named “Locust Grove”, in Richmond, Virginia, from his first wife, Susannah.

He was a legend in his own time.


Memories: 5
Enter a personal reminiscence or story.
Chuck Shorter
At Guilford Court House, he was gravely wounded and "left for dead" on the battlefield, but was recovered and recuperated by a local farmer.

In "Francisco's Fight" at West Creek Tavern in Nottoway County, VA, he "... single-handedly subdued nine of Tarleton's feared Dragoons in hand-to-hand combat" (a scouting or "recon" party), while his cohort stole off to warn Gen. Horatio Gates of Tarleton's whereabouts. One of the Dragoons attempted to shoot him, but the pistol mis-fired. Should be Banastre Tarleton (erata in story above).

posted 5 Jan 2011 by Chuck Shorter
Chuck Shorter
His modest (but restored)"Locust Grove" house is on Locust Grove Rd (local Rt. 626) off of U.S. Rt 60 in Buckingham County, VA (not Richmond).

He is buried in Shockoe Cemetary in Richmond, VA, which grave site has an impressive monument with freemason symbology (although there is no record that he was a mason - possibly an honorarium).

posted 5 Jan 2011 by Chuck Shorter
Chuck Shorter
The above story does not mention Peter's wounding in the heroic taking of the Trenton Redoubt (NJ), one of three survivors of a 25-man force under indirect command of Gen. George Washington (NO Redcoat survivors). After recuperating in Virginia, Peter went South to join the forces of Gen. Horatio Gates (Guilford Court House, NC), where he complained of his swords "breaking like toothpicks" when he cleaved Redcoats. Upon hearing word of this in Pennsylvania, Gen. Washington had a 6-foot broadsword especially forged and sent to Peter, so he could "cleave Redcoats from brow to breastbone".
posted 5 Jan 2011 by Chuck Shorter
Chuck Shorter
Life story sources cited: "Peter Francisco, Portuguese Patriot" by William Arthur Moon, related to China missionary Lottie Moon, late of Crewe, VA (site of "Lottie Moon's Tomb").
posted 5 Jan 2011 by Chuck Shorter
Alice Luckhardt
The monument to Patriot Peter Francisco was erected at the site of Guilford Courthouse by Peter Francisco Pescud, a grandson of the Revolutionary hero. It was unveiled in 1904.
posted 18 Nov 2008 by Alice Luckhardt
Login to add a memory.
Sponsored Search by Ancestry.com
DNA
No known carriers of Peter's DNA have taken a DNA test. 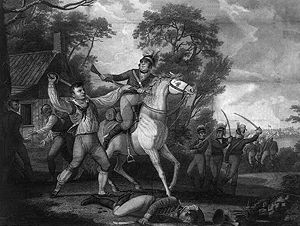 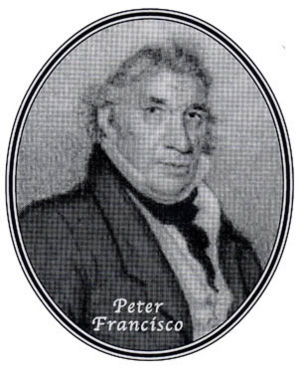 Jeanne (Lunn) Aloia
You may find this of interest:

4. The family of Peter Francisco, the "Virginia Giant", who was a hero in the Revolutionary War. His origins are obscure -- some say he may have been Portuguese. Click on the following link for the Society of his descendants: http://www.peterfrancisco.org/

posted Sep 01, 2014 by Jeanne (Lunn) Aloia
[Living Woodhouse]
Francisco-1 and Francisco-38 are not ready to be merged because: Conflict of spouse
posted May 10, 2014 by [Living Woodhouse]
Albert Colbert II
Francisco-1 and Francisco-38 appear to represent the same person because: Same dates of birth/death
posted Apr 10, 2014 by Albert Colbert II
Chuck Shorter
According to marriage records in my grandmother's (Flossie Virginia Shorter, nee Hobbs) family bible, I'm a 5th great grandson of Peter Francisco. I'm related to other great grand-children in the Shorter/Hobbs lineage as well as Bobby Lloyd of Virginia and Travis Bowman of Charlotte, NC. With 3 wives and 8 children, there's likely many more descendants.
posted Jan 05, 2011 by Chuck Shorter