Anne Frank is renowned for telling the story of the Holocaust through the eyes of a young Jewish girl enduring the terror of a German concentration camp in her diary, kept from 12 June 1942 to 1 August 1944, and was published after her death.

Born Annelies Marie Frank on 12 June 1929, to Otto Frank and Edith Holländer in the city of Frankfurt in Weimar, Germany, [1][2][3] most of Anne's life was spent in or near Amsterdam, in the Netherlands.[3][1]

The Frank family moved from Germany to Amsterdam in 1933, the year the Nazis gained control over Germany.[2] Unfortunately, by May 1940, they were trapped in Amsterdam by the German occupation of the Netherlands.[2] Though born a German national, Frank lost her citizenship in 1941.[2]

By July 1942, persecutions of the Jewish population had increased and the family went into hiding in some concealed rooms in the building where Anne's father worked.[4][3] Two years later, the group was believed to have been betrayed by someone who knew where they were,[5] and then transported to concentration camps. [6][5] Anne and her sister, Margot, were eventually transferred to the Bergen-Belsen concentration camp, where they died most likely of typhus.[7][5][4] Sources for the dates of death of Anne and Margot Frank have never been conclusive. However, the estimation given on their official death certificates, dated by the Committee for the Reporting of the Decease of Missing Persons was 31 March 1945.[7][5] The Anne Frank House estimates it may have been February. [8][7][9] Only a few weeks later, the camp was emancipated by the British.[5]

The Diary of a Young Girl

The diary of Anne Frank documents her experiences leading up to and during her hiding during World War II.[5][10] The blank diary, actually an autograph book given to her as a present on her 13th birthday, chronicles her life from 12 June 1942 until 1 August 1944, just three days before the family was found.[11][2][5][10] She would go on to use whatever she could write on-other journals and loose paper, to continue her story.[5] Much of the diary was addressed to others-often to "Kitty", the name of her diary.[3][5]

Anne's diary gave detail about growing up in that time that few others could give. She spoke of the usual curiosity of a teenage girl, like disagreements with her mother and kissing,[5][10][3] but also of the worry over the lack of food, the fear of being found, and the difficulty in living in such tight, hidden quarters.[10][3]

Otto Frank, Anne's father and the only survivor of the family, returned to Amsterdam after the war to find that Anne's diary had been saved, and his efforts led to its publication in 1947.[11][10][5] In his own memoir, he noted the painful process of reading through her diary and remembering the events she described. He said, "For me it was a revelation ... I had no idea of the depth of her thoughts and feelings ... She had kept all these feelings to herself".[2] The diary nearly didn't make it to the public, after the family who found it, the Gies, found out it named everyone who had helped the Franks, and they feared for prosecution.[5] Luckily, they didn't realize what was within until after Otto had secured publication.[5][11]

Anne gained international fame posthumously after her diary was published.[5] Originally called "The Back House"[5], Anne's diary was translated from its original Dutch and first published in English in 1952 as "The Diary of a Young Girl".[2] It has since been translated into 67 languages and sold over 30 million copies.[5][10][4] It has also been the inspiration for several plays and films.[2]

Seventy years after the diary was published, Anne's father, Otto, was named as co-author, in an attempt to extend the copyright on the book.[4] The royalties from the sale of her diary goes to various children's charities across the world, like UNICEF.[4] Many people were upset with the decision to name Otto as a co-author since most of what he did was editorial.[4] Others were upset that the book would not enter public domain as quickly.[4]

Apart from her book, Anne's legacy lives on in the many pieces of art around the world honoring her life, as well as the use of her diary to teach people about the difficulty of war and persecution, and the impact one person, no matter their age, can make on their world. 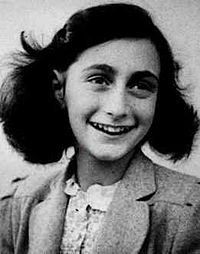 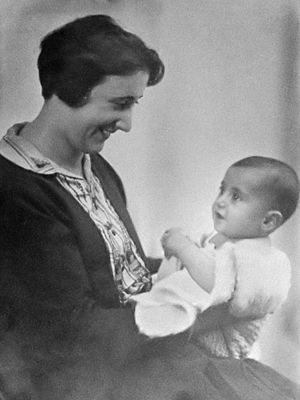 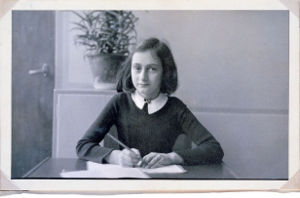 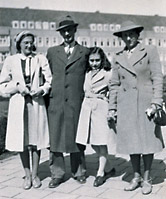 Lisa (Kelsey) Murphy
Her family had to lock their doors by 8 pm, the police took her bicycle, she was not allowed to go to school, her father was not allowed to drive, they could only buy food from special "Jewish Shops", and her sister was ordered to a concentration camp. Despite all of this around her, Anne still knew that there was a goodness in people. She never gave up on humankind. She is quoted as saying "Think of all the beauty still left around you and be happy."

posted Sep 17, 2017 by Lisa (Kelsey) Murphy
Summer (Binkley) Orman
Anne's diary was one of the first things I can remember reading that really stuck with me, at about 12 years old. Reading it changed my outlook on a lot of things; no small task for a 12 year old with an already limited world view. Visiting her home, the hiding place, and the concentration camps, are all on my bucket list.

Categories: This Day In History June 12 | Holocaust Victims at Bergen-Belsen | Example Profiles of the Week | Notables